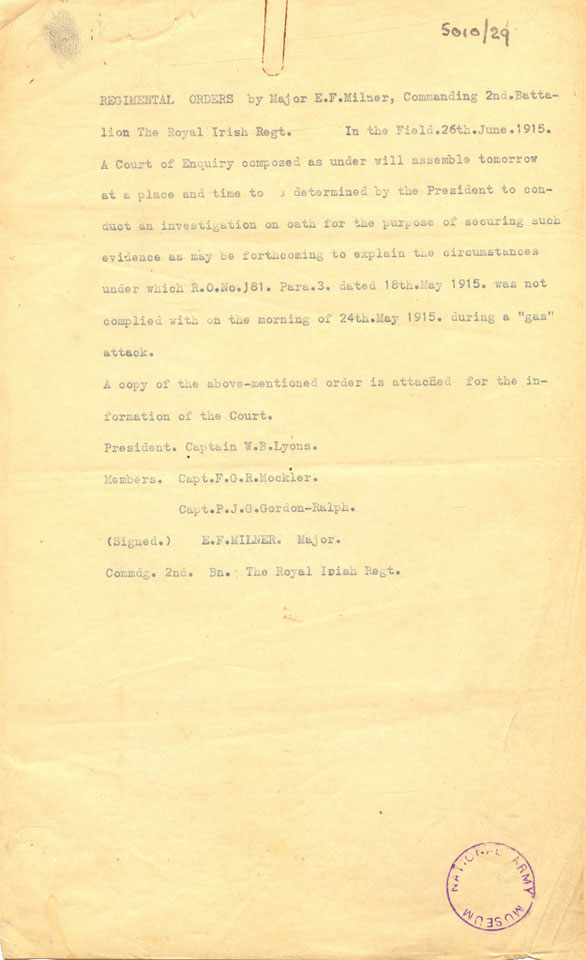 Typescript copy of the proceedings of a court of inquiry held on 27 June 1915 regarding the non compliance of the men of the 2nd Battalion, Royal Irish Regiment, to an order prohibiting withdrawals in the face of a gas attack on 24 May 1915

In the early hours of 24 May 1915, during the Second Battle of Ypres, the Germans unleashed a heavy gas attack as a prelude to an assault on Bellewarde Ridge. Many British soldiers withdrew from their trenches in the face of this gas attack. The men of the 2nd Royal Irish, had recently been prohibited from making such withdrawals by an order issued by their commander, Lieutenant Colonel Redmond Moriarty. As a consequence, their withdrawal on this occasion was the subject of a court of enquiry.

Following the gas attack, the Germans succeeded in enfilading the positions held by the 2nd Royal Irish and inflicting severe casualties upon them. All of the battalion's officers who were in the trenches that day, including Colonel Moriarty, were recorded as killed or missing except Lieutenant Herbert Donald Mckay, Connaught Rangers, attached 2nd Royal Irish, as were 379 other ranks. These casualties included Private John Condon. Aged just 14, Condon is believed to be the youngest British soldier to be killed in action on the Western Front.