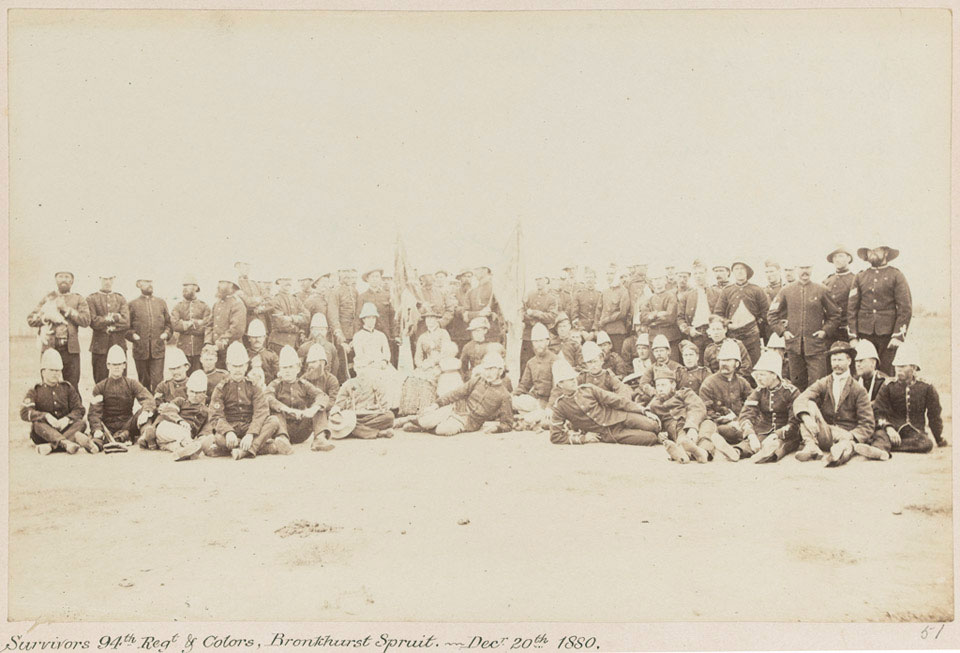 Headquarters, 'A' and 'F' Companies of the 94th Regiment, with commissariat and medical personnel, 269 strong including three women and three children, were ambushed by Boer forces while en route to Pretoria on 20 December 1880. 90 were wounded and 65 were killed or subsequently died of their wounds, and the British were forced to surrender.

Lieutenant Ralph Egerton of the Commisariat and Transport Department, with the regimental colours concealed about his person, was allowed by his captors to walk, with Sergeant Bradley, to Pretoria, for medical assistance. This photograph was taken after the colours were returned to the 94th at a ceremonial parade following the arrival of the wounded at Pretoria.

Mrs Anne Fox, wife of Sergeant-Major G Fox died from the effects of her wounds in 1888. Mrs Marion Smith, the widow of Bandmaster Benjamin Smith (died 4 July 1880), and Mrs Margaret Maistre (died 1888) assisted with the treatment of the wounded. All three women were awarded the Royal Red Cross for their actions during and after the action and were, upon their deaths, afforded military funerals.

From an album of photographs compiled by George Froom, 94th Regiment of Foot.