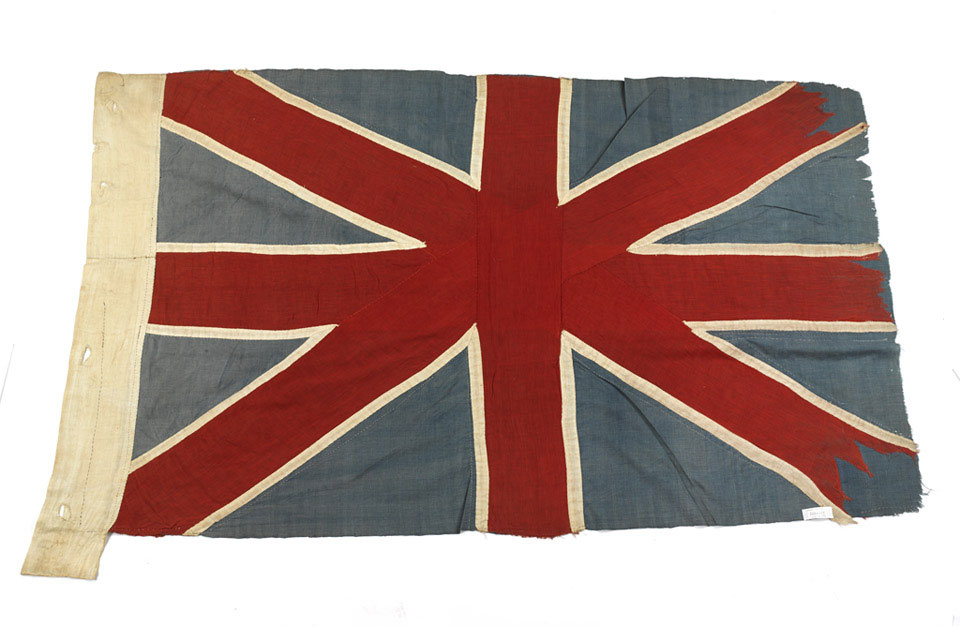 Union Flag made at Chitral during the siege, 1895

Surgeon Major George Robertson, Indian Medical Service, commanded the garrison at Chitral Fort on India's North West Frontier, and ordered a flag to be made during the famous siege. He later wrote: 'It seemed almost improper, not to say illegal, to fight without the Union Jack floating over our heads'. During the siege, Robertson, thinking that the lack of a flag over the outpost might also bring bad luck, formed a committee which decided to produce a flag. A Sikh soldier, described as 'a good needleman', created a flag from 'cheap red-dyed cloth, a blue turban and some white cotton material'. A navy-cut tobacco tin provided the pattern for the flag but 'critical eyes have since discovered it was made incorrectly, that certain narrow white stripes were all the same width, so that it could never be flown upside down as a signal of distress. Happier are we that such a contingency was never provided for.'

Robertson went on: 'its contriver had sought to improve upon our national ensign by sewing in the middle a crescent and crossed swords' which he was requested to remove. The flag was raised under cover of darkness above the south-west tower of the fort. Robertson describes the effect on morale thus 'during a siege there is plenty of room for superstition. We, for instance, will always believe that this flag turned the scale of our fortunes from the moment it was run up. In truth it helped greatly. It cheered our hearts and stiffened our backs'. Robertson kept the flag, which became 'one of my dearest possessions'.