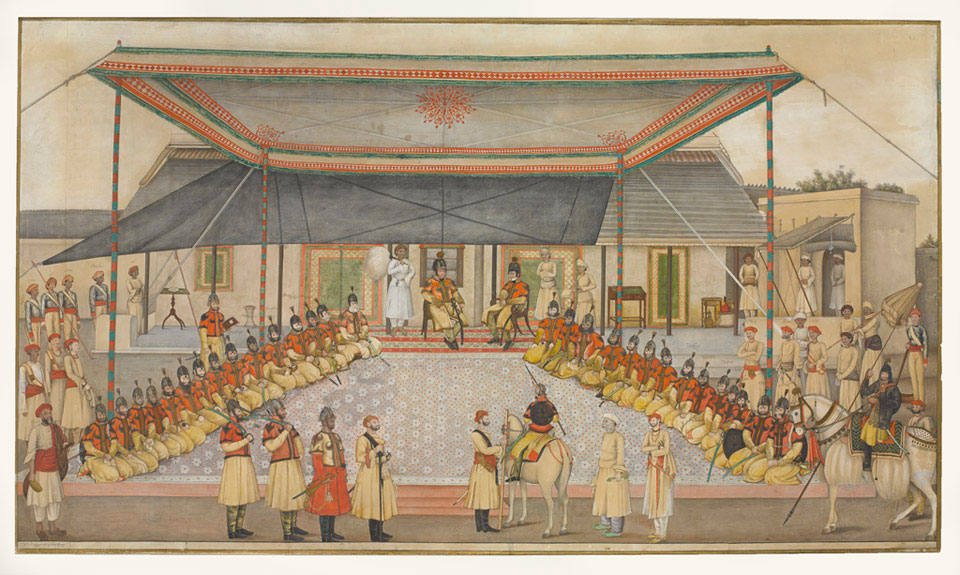 Inscribed lower left 'The work of Ghulam Ali Khan painter resident of the Caliphate of Shahjahanabad completed in the Christian year 1827'.

Skinner, seated centre left, may be seen presiding over a durbar (council) of his regiment, an occasion when any soldier was at liberty to raise with his commanding officer anything that concerned him. The holding of a durbar, when Skinner mixed freely with his soldiers and men, was a conscious re-creation of Afghan and Mughal military and ceremonial traditions, which gave his soldiers a corporate sense of their 'upward mobility' in the Company's service.

In this scene, a new recruit is formally introduced to Skinner and his officers. Irregular cavalry units used a silladar system, which meant that new recruits supplied their own horse and equipment. Here the horse is measured and the recruit inspected.

One of the details making this painting so exceptional is that nearly all of the figures have an inscription in gold giving their name, rank or role. This makes it possible to identify, for example, the first seated man on the right-hand side as Duffadar (cavalry sergeant) Ganga Sankar, the only Hindu soldier present. He wears a necklace of beads and a painted tilak (religious mark) on his forehead.