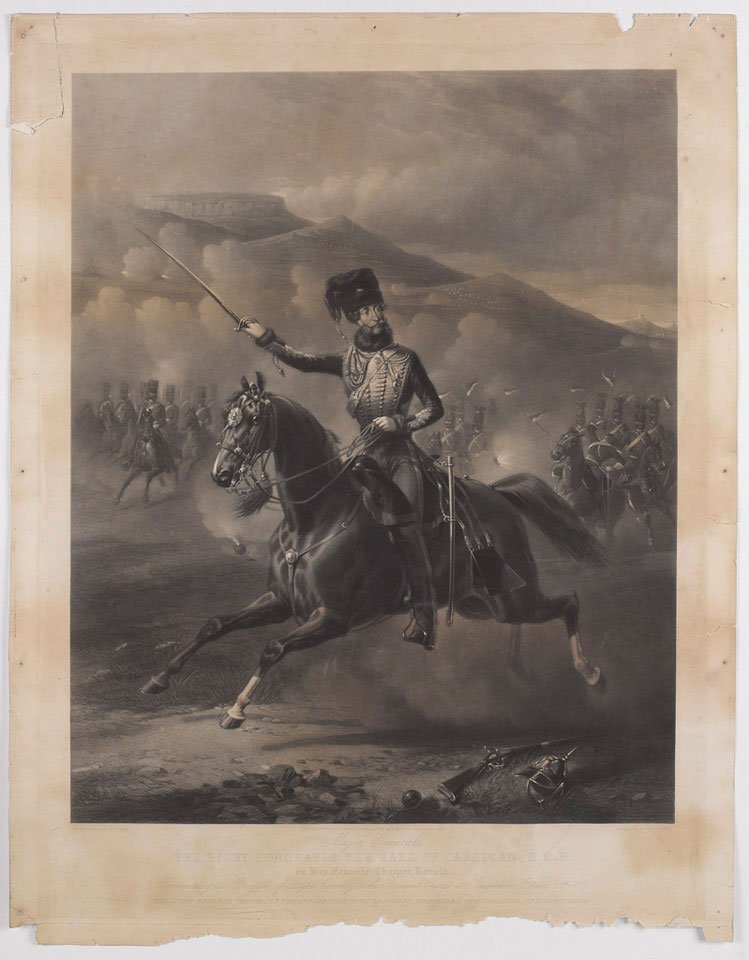 'Major General The Rt Hon The Earl of Cardigan KCB on his favourite charger Ronald', 1854

Lithograph by H Cousins, after an oil on board by Frank de Prades, published by Messrs Fores, 1 October 1856.

By 1854 James Thomas Brudenell, Seventh Earl of Cardigan (1797-1868) had long been the most notorious officer in the British Army. Although he first joined the Army in 1824 at the relatively advanced age of 27, his family was wealthy and by purchasing his commissions he had, within eight years, risen to command the 15th Hussars.

His ill-temper ensured that he constantly quarrelled with his officers and matters did not change when he received the Lieutenant-Colonelcy of the 11th Hussars in 1836. The so-called 'Black Bottle' affair in May 1840, when he ordered under arrest one of his officers for placing bottled wine on the mess table rather than having it decanted, became a cause celebre. He followed it up by challenging to a duel and wounding another officer who had written critically on the affair to the newspapers. Cardigan was tried for attempted murder before the House of Lords only to be acquitted on a technicality. In the years that followed Cardigan was able to escape the same degree of public scrutiny and was promoted major-general on 20 June 1854, but the events of the Crimean War (1854-1856) were dramatically to restore him to the headlines.