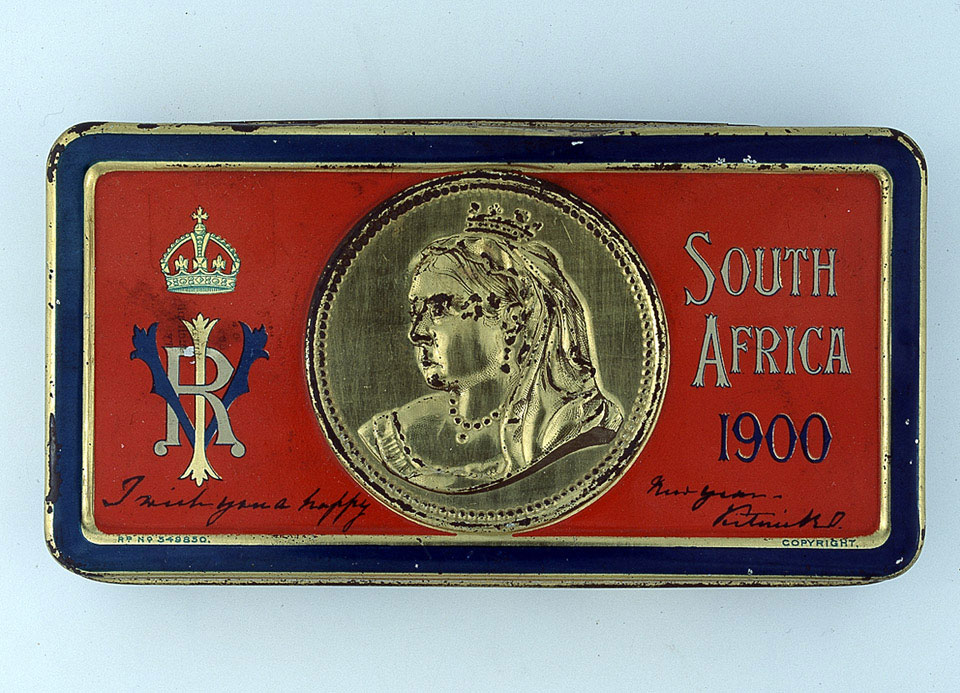 In 1899 Queen Victoria decided to send a gift of tin boxes of chocolate to her troops serving in South Africa. It was intended that every soldier and officer should receive a box with the inscription 'South Africa 1900' and in the Queen's handwriting 'I wish you a happy New Year'.

In order to carry out this project, the Queen commissioned the country's three principal chocolate manufacturers, J S Fry & Sons, Cadbury Brothers Limited and Rowntree and Company Limited, to undertake the order for what amounted, by the end of 1900, to 123,000 tins. As Quakers, all three manufacturers refused to accept payment for the order and, not wishing to profit from the War, they offered to donate the chocolate instead.

The manufacture of the tin boxes themselves was funded personally by the Queen. They were based on a design by Barclay and Fry Limited of Southwark, but since each of the chocolate manufacturers used different firms to supply the tins, there are variations in their dimensions, the shade of colouring and the printing of the portrait medallion of the Queen. The tins had rounded corners for ease of storage in a soldier's knapsack and each contained a half-pound of vanilla chocolate.

As a gift from the Queen, many soldiers preserved their tins with the chocolate intact, even posting them back home for safe-keeping. In exceptional cases the recipients did not even dare untie the ribbon round the packaging. The tins were so highly valued by their contemporaries that soldiers who were prepared to sell them could ask prices as high as £20. An Army Order issued from Bloemfontein in April 1900 decreed that the tins were to be forwarded to officers and men who had been invalided home before the Queen's gift arrived, and to next of kin of those who had died during the Boer War (1899-1902).