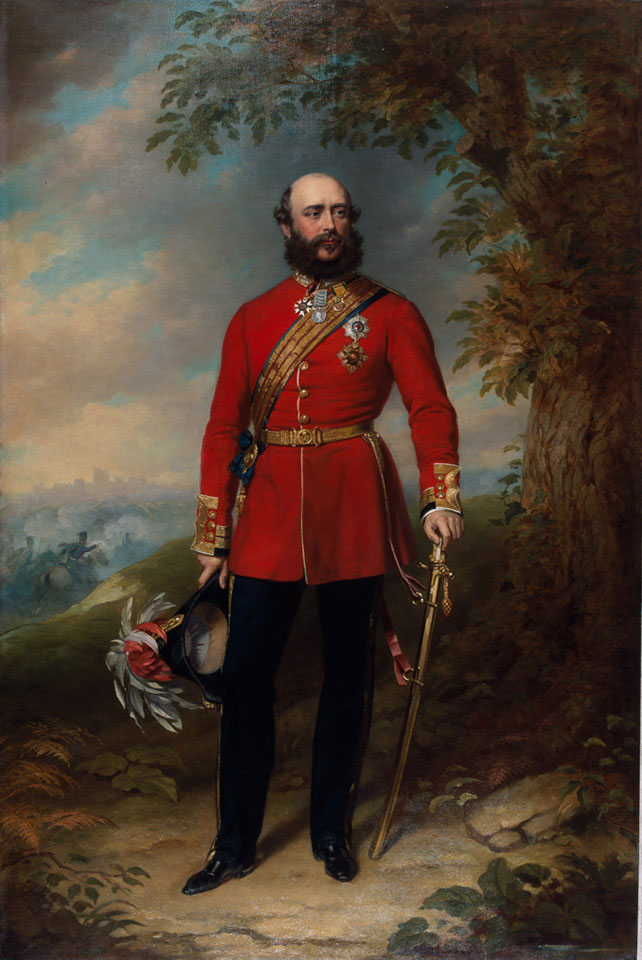 The Duke of Cambridge (1819-1904) became a field marshal in 1862, an event probably commemorated by this portrait. Cambridge was a warm, kind man, with a remarkable capacity for hard work and a passion for military traditions. His morganatic marriage to the actress Louisa Fairbrother, thereafter known as Mrs FitzGeorge, was never officially recognised, but he was buried beside her at Kensal Green Cemetery rather than in the royal vaults at Windsor Castle.

The eldest grandson of King George III and the last to die, Prince George of Cambridge was a cousin of Queen Victoria. He entered the British Army in 1837, serving with various regiments in Gibraltar, England and Ireland. He succeeded his father as 2nd Duke in 1850. The Crimean War (1854-1856) provided his long-awaited opportunity for active service. In 1854 he commanded the British 1st Division, but his leadership of this formation at the Battle of the Alma was questionable and showed his lack of field experience. He was also present at the battles of Balaklava and Inkerman, where he showed conspicuous bravery and had a horse shot under him. Invalided back to Britain with exhaustion at the end of 1854, he was mentioned in despatches and received the thanks of Parliament.

For 39 years, from 1856 to 1895,the Duke of Cambridge was Commander-in-Chief of the Army, and completed nearly 60 years' military service before he was forced to retire. Although keenly interested in the Army's organisation and administration, he was opposed to many of the reforms introduced during the 1870s and 1880s.