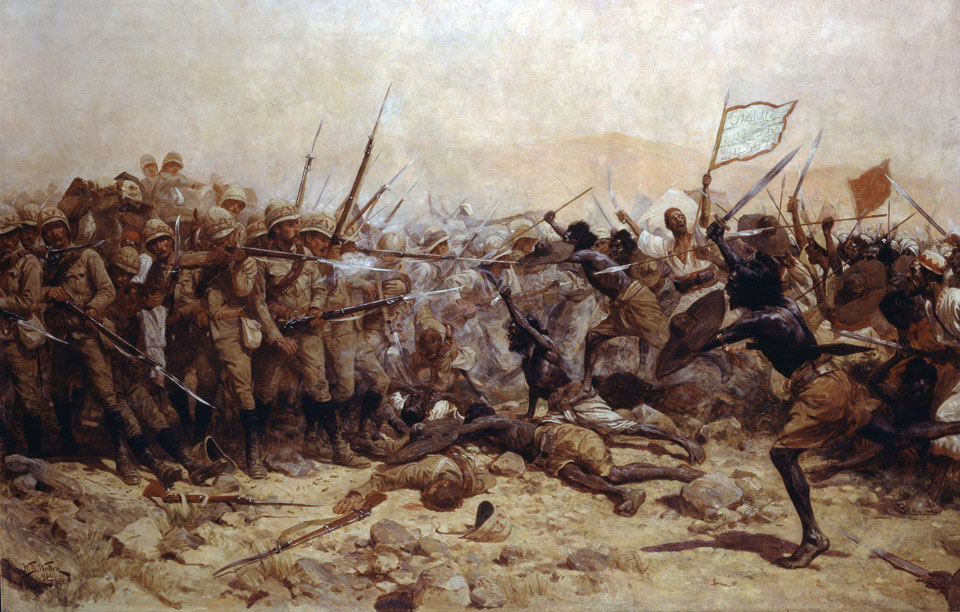 While on its way to relieve General Gordon at Khartoum, the cross-country detachment of the British Desert Column, under the command of Sir Herbert Stewart (1843-1885), was attacked by the Sudanese followers of Mohammed Ahmed, self-proclaimed 'Mahdi' (guide, or redeemer, of Islam). The British square broke and was closed only after desperate hand-to-hand fighting. Stewart's men were victorious, suffering 168 casualties to the Mahdists 1,100. The battle was described by Winston Churchill as 'the most savage and bloody action ever fought in the Sudan by British troops'.

Earlier, following a revolt against foreign control in the Sudan, led by the Mahdi, General Charles Gordon was ordered to report on a withdrawal of British and Egyptian forces from the country. He reached the capital, Khartoum, in February 1884 and immediately evacuated women, children and the sick, before becoming besieged.

In a race against time to relieve Gordon and his outnumbered garrison a relief column under General Sir Garnet Wolseley set out from Cairo in October 1884. Realising that his infantry, travelling in boats up the Nile, might not reach Khartoum in time to save Gordon, Wolseley detached the Desert Column to travel overland by a faster but more dangerous route. This force was composed of four regiments of camel-mounted troops formed from the various regiments in Egypt and a detachment of the 19th Hussars.

After the Battle of Abu Klea the Column continued its advance but was subjected to several minor attacks and Stewart was wounded during one of these engagements on 19 January. He handed over command to Sir Charles Wilson. The Column finally reached Khartoum on 28 January, two days after Gordon's death and the fall of the town. Stewart died on the way back from Khartoum on 16 February 1885.