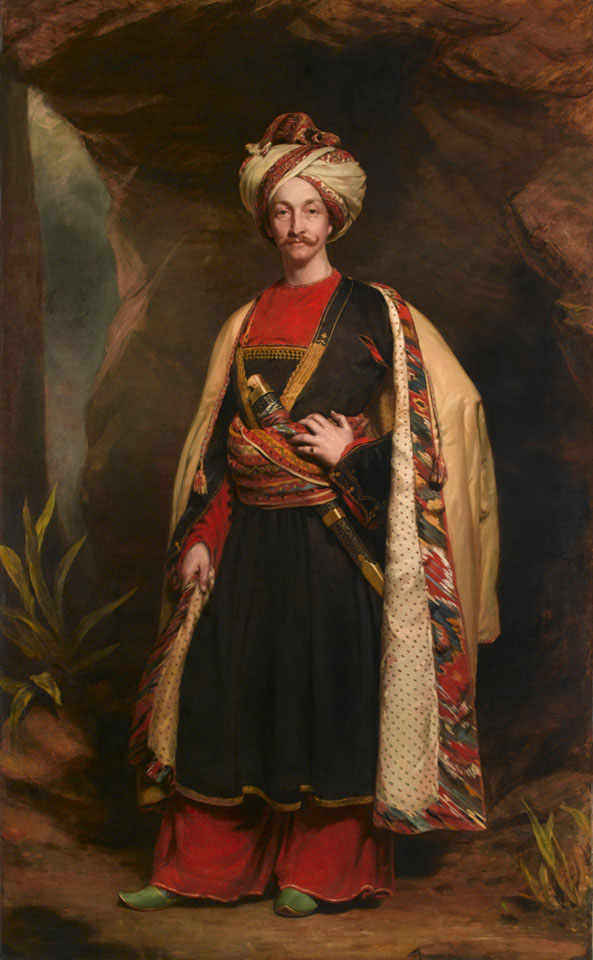 This flamboyant portrait is in keeping with an officer who enjoyed as dashing a career as Captain (later Lieutenant-General) Colin Mackenzie (1806-1881). Joining the 48th (Madras) Native Infantry in 1825, he fought in various local campaigns, accompanying an expedition against piracy in the Straits of Malacca in 1836. Then, as Assistant Political Agent at Peshawar, Lieutenant Mackenzie was sent to Kabul in 1840, during the 1st Afghan War (1838-1842). He led the defence of Kabul fort against the Afghans and the subsequent night fight to escape from it, leading General Sale's retreating force to Gandamak. He returned to Kabul and was present at the conference between the Afghan Chief, Akbar Khan, and the British envoy, Sir William Macnaghten, where the latter was murdered.

Mackenzie survived the ill-fated retreat to Jellalabad, only to be chosen as a hostage by Akbar Khan. He was freed by a force commanded by Sir George Pollock before Akbar Khan could sell him into slavery. Deeply religious, he was respected by the Afghans, who called him 'the English Mullah'.

In 1848 Mackenzie raised and commanded a Sikh regiment to keep peace on the north-west frontier of India. As an expert on this area, it was said to have been his influence which persuaded Lord Dalhousie, the Governor-General, to give up the idea of ceding the land from the Indus to Peshawar, to Afghanistan.