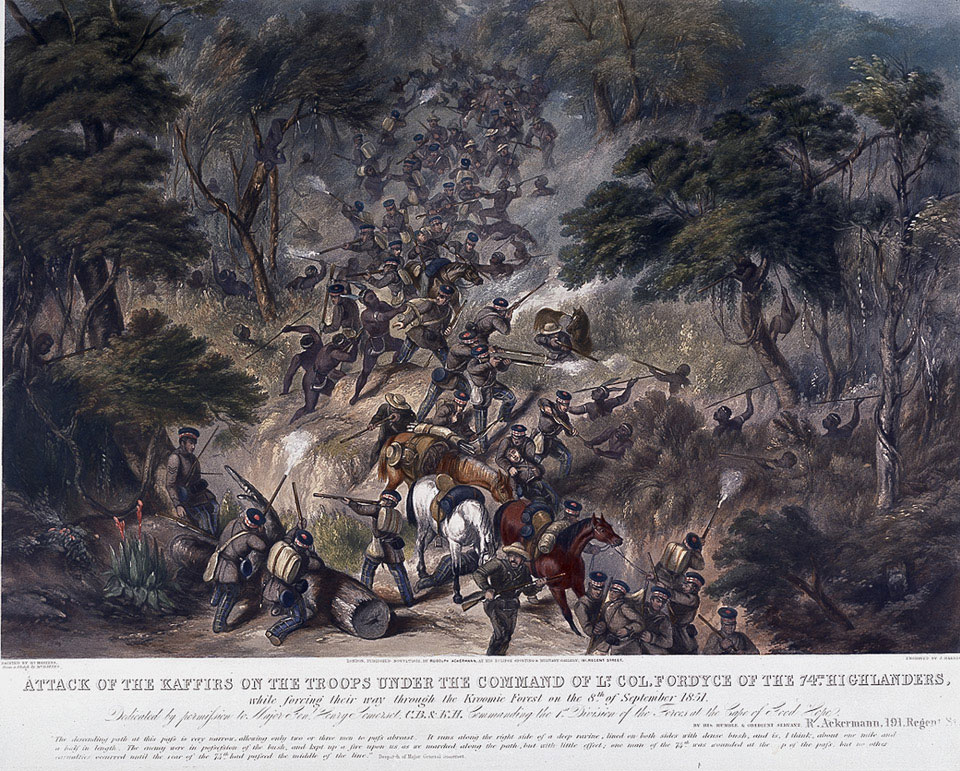 'Attack of the Kaffirs on the troops under Lieutenant-Colonel Fordyce of the 74th Highlanders, while forcing their way through the Kroomie Forest on 8th September 1851'

The term 'kaffir' derives from an Arabic word used to describe non-believers or non-Muslims. Use of the term spread via trade and commerce and European colonial regimes adopted it as an official term to describe various ethnic groups including the Xhosa. It is in this context that the word is used in the title and series title of this print.

The term is now regarded as a pejorative racial term primarily because of its association with the Apartheid regime in South Africa in which it was used as a derogatory term to describe Black Africans. The phrase 'the K-word' is now often used to replace the word.

With the arrival of troop reinforcements during mid-1851 (during the 8th Cape Frontier War) it was possible for Major-General Sir Harry Smith to commence offensive operations on the eastern frontier, an important element of which was the clearing of the Gcaleka Xhosa under their chief, Maqoma (1798-1873), from the Kroome range, west of Fort Beaufort. Action began on the morning of 8 September 1851 when on his own initiative, Lieutenant-Colonel John Fordyce, 74th (Highland) Regiment, led a force to the plateau at the top of the Kroome range. A large number of Xhosa under Maqoma's personal command attacked the British troops, but after a short time they withdrew, having inflicted few casualties on Fordyce's men. However, the engagement had involved the expenditure of so much of the 2,000 rounds of ammunition that the troops had taken with them that Fordyce felt obliged to withdraw.

Fordyce conducted a fighting withdrawal down a pass, which was steep, narrow and heavily wooded. The column retired in single file, the Cape Mounted Riflemen leading their horses, followed by the 74th with Mfengu ('Fingo') allies bringing up the rear. Attacked from both sides, the latter panicked and crowded down upon the 74th who were already engaged in hand-to-hand combat in front and rear. All along the line, every man fought for himself, until the Xhosa finally disengaged. The 74th's total casualties were fifteen men killed and one officer and fourteen men wounded. Fordyce was killed on 6 November 1851 leading his regiment in an assault on the Waterkloof stronghold.