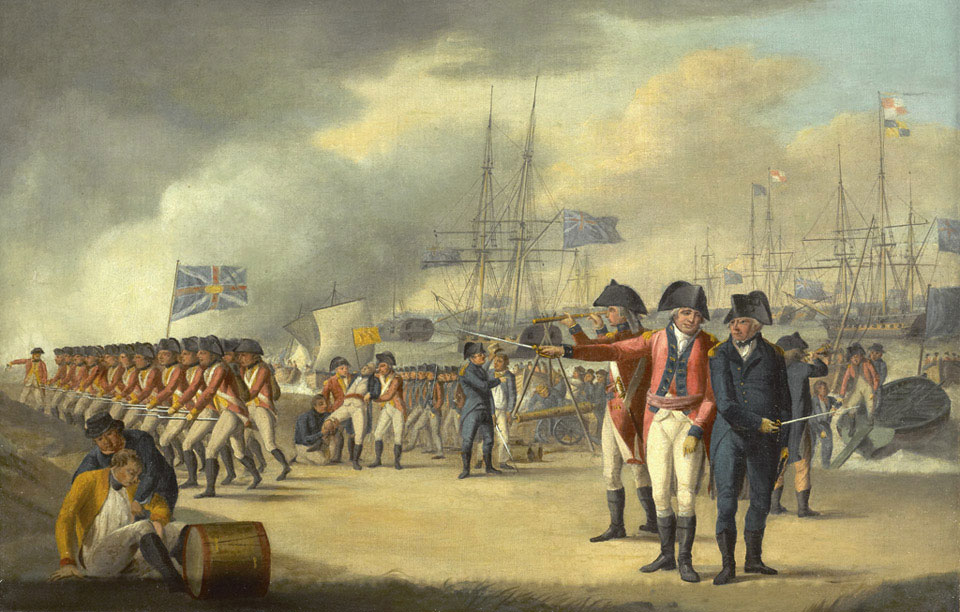 In 1799, General Sir Ralph Abercromby (1734-1801) led a joint Russo-British expedition to the North of Holland to restore the country to the Prince of Orange. The force sailed on 13 August with the fleet commanded by Vice-Admiral Mitchell. They anchored off the island of Texel, the troops disembarking on 27 August. However, in the confused landing a number of boats capsized, drowning both soldiers and seamen. This unfortunate incident is indicated in the painting by the sick-looking drummer on the ground in the left foreground and the injured figure in the centre.

Abercromby's force advanced immediately, coming under fire from the Dutch republican army commanded by General Daendels. After 12 hours of fighting, the enemy retreated. On 30 August Admiral Mitchell confronted the Dutch fleet in the Texel. It surrendered without a fight; the Dutch sailors having forced their officers to give up their ships to the service of the Prince of Orange.

On 10 September Abercromby defeated another attack by General Daendels, but three days later he was superseded as commander by the Duke of York. Reinforced by two Russian divisions, the British Army failed to co-ordinate their movements. In the disastrous attack on Bergen which followed, Abercromby's column was successful, but the operation ended in defeat. The Convention of Alkmaar concluded hostilities on 20 October and the English surrendered their Dutch and French prisoners. Abercromby was offered a peerage as a reward for the capture of the Dutch fleet but, disgusted at the armistice, he refused it.