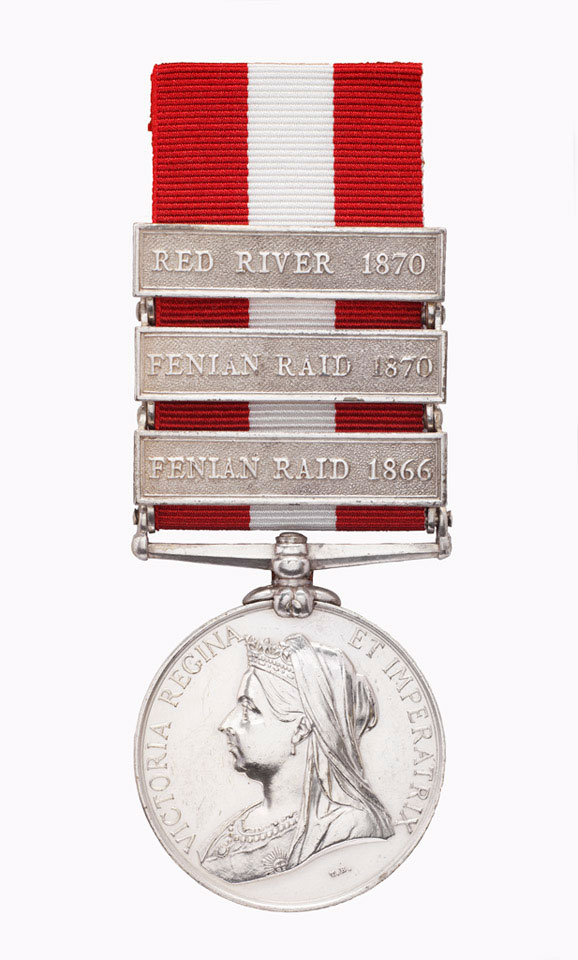 Circular, silver campaign medal with, on the obverse, the veiled head of Queen Victoria, with the inscription in Latin, 'Victoria Regina et Imperatrix' (Victoria, Queen and Empress). On the reverse, the ensign of Canada within a wreath of maple leaves with the inscription, 'Canada', above. The medal is suspended on a red and white ribbon with three clasps: 'Fenian Raid 1866', 'Fenian Raid 1870' and 'Red River 1870'.

During his long and distinguished career Field Marshal Sir Garnet Wolsely (1833-1913) saw extensive service in Canada. He was despatched there in 1861, tasked with helping to shore up the country's defences following the 'Trent Incident', a diplomatic crisis which threatened war between Britain and the United States.

He later helped to repel incursions into Canada made by the Fenain Brotherhood, an Irish republican group based in the United States and in 1867 he was appointed Deputy Quartermaster General in Canada. His crowning achievement came In 1870 when he led an expedition through 600 miles of wilderness to the Red River Colony, Manitoba, to put down a rebellion led by Louis Riel, leader of the Métis, a people of mixed European and Native American ancestry. Wolseley's mastery of planning and logistics for such a long and arduous trek received high praise and was he well-rewarded on his return to Britain later that year.

The Canada General Service Medal 1866-70 was issued by the the Canadian Government in 1899 and could be applied for by Imperial and Canadian service personnel who had served in the Fenian Raids. This example includes the complete set of three clasps.