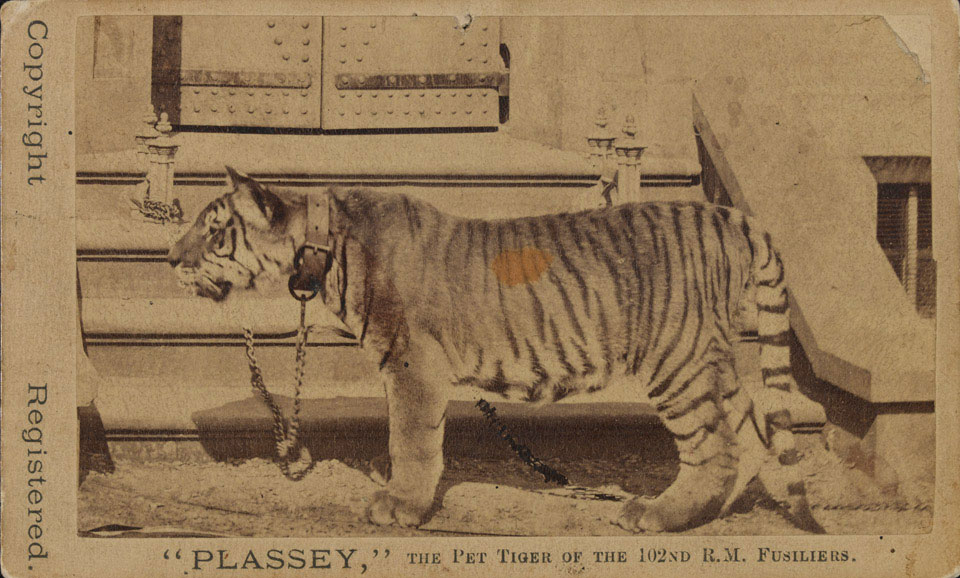 The regimental pet of the 102nd Regiment of Foot (Royal Madras Fusiliers) was a Bengal tiger cub called 'Plassey'. He was named after Robert Clive's famous victory of 1757, which was also a battle honour of the Madras Fusiliers. Indeed, the cap badge of their regiment also depicted a tiger, a beast much respected in Indian culture for its strength, grace and power.

'Plassey' was one of a pair of tigers captured by Captain Frank Thackwell of the 5th Lancers, and presented by him to the Madras Fusiliers. Legend has it that 'Plassey' was fairly tame and even on friendly terms with the 102nd's other regimental pets in India, an antelope and a dog. In 1868, after 233 years of Indian service, the 102nd were shipped to England for the first time. 'Plassey' came with them and was certainly well behaved on the voyage home from India, when he was in the company of two young leopards. On arrival, he lived unchained with the garrison at Dover, but apparently alarmed the local inhabitants on several occasions. He was reluctantly sent to the local zoological gardens, where he eventually died.