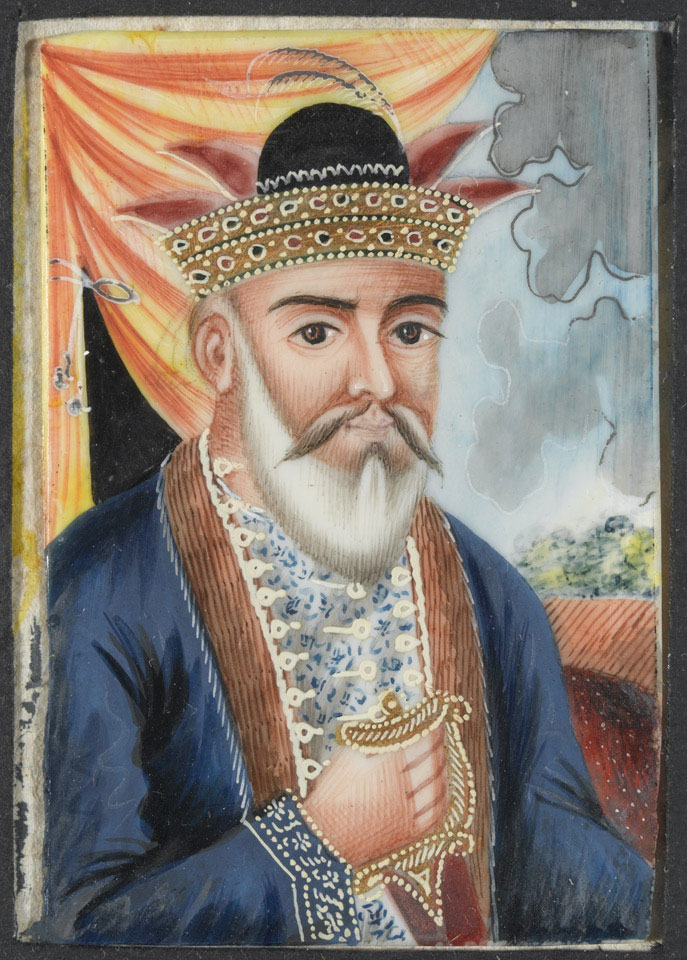 Miniature portrait in watercolour on ivory, by a Company artist, Patna, India, 1850 (c).

Dost Mohammed Khan, a member of the Barakzai dynasty, was Emir of Afghanistan from 1826 to 1839. His country's position between the Russian Empire and India meant that the British East India Company was anxious to ensure that a pro-British Emir was on the throne at Kabul. Fearful of a Russian invasion of India via Afghanistan, in 1837 the British sent an envoy to Kabul to gain his support. Dost Mohammed was in favour of an alliance, but when the British refused to help him regain Peshawar, which the Sikhs had seized in 1834, he prepared to talk to the Russians, who sent an envoy to Kabul. This led Lord Auckland, the Governor-General of India, to conclude that Dost Mohammed was anti-British. The decision was taken to replace him as Emir with a former ruler, Shah Shuja.

In March 1839 a British force advanced through the Bolan Pass, and on 26 April reached Kandahar. Shah Shuja was proclaimed ruler, and entered Kabul on 7 August, while Dost Mohammed sought refuge in the Hindu Kush. The British eventually caught him on 4 November 1840. He remained in captivity during their occupation and the disastrous retreat from Kabul in January 1842. Following the British recapture of Kabul in the autumn of 1842, Dost Mohammed was restored to the throne, the unpopular Shah Shuja having been murdered. The Company decided that occupying the country would cost too much in men and money and withdrew. Dost Mohammed reigned until his death in 1863. With some exceptions, his relationship with British India was friendly, and from 1855 regulated by treaty.

This miniature was displayed at the Colonial and Indian Exhibition, 1886.