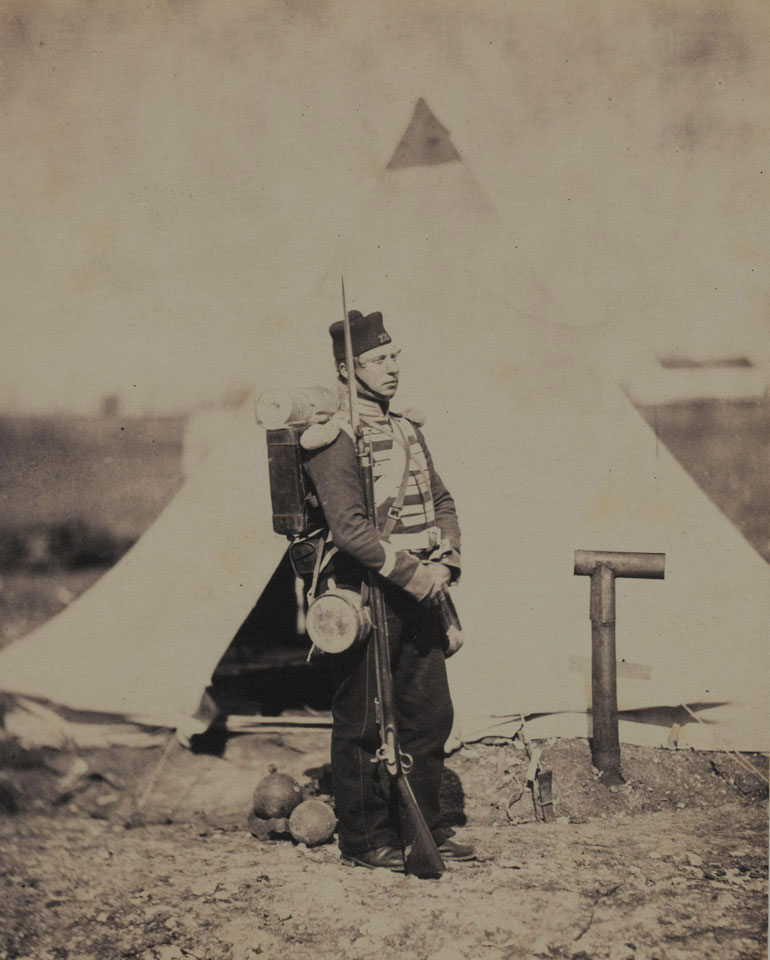 Private of the 28th (North Gloucestershire) Regiment of Foot in full marching order. He carries his waterbottle, ammunition pouch, knapsack, rolled blanket, haversack and Minié Rifle Musket. Note that he is wearing the waistbelt and separate ammunition pouch belt, not cross belts.

On first landing in the Crimea, soldiers' knapsacks were ordered to be left aboard ship and until they were brought ashore six weeks later, blankets were used instead by soldiers to carry their kit. However, the blankets tended not to stay in position and often came apart, which resulted in the loss of equipment. A great coat or blanket was usually carried on top of the knapsack with the mess tin strapped to either its top or back. A light-colored linen haversack for carrying rations and a blue painted, round, wooden water bottle with a brown leather strap was also worn.

Some of the infantry soldiers wore two buff leather cross belts: one ran over the left shoulder and held the cartridge pouch; the other, which held the triangular socket bayonet in a buff leather frog, ran over the right shoulder. They crossed over the chest and were held in place with a regimental belt plate. The two cross belts however were superseded by the introduction of a waistbelt in about 1850, which took away the discomfort used by the underarm straps of the cross belts. As many as two thirds of the infantry regiments, like the 28th (North Gloucestershire) Regiment of Foot, may have been issued with the new waistbelt before the Crimean War began. However for some they were never received. Major-General James B Bucknall Estcourt reported in a letter in of February 1855 that none of the regiments had received the new belt since arriving there.