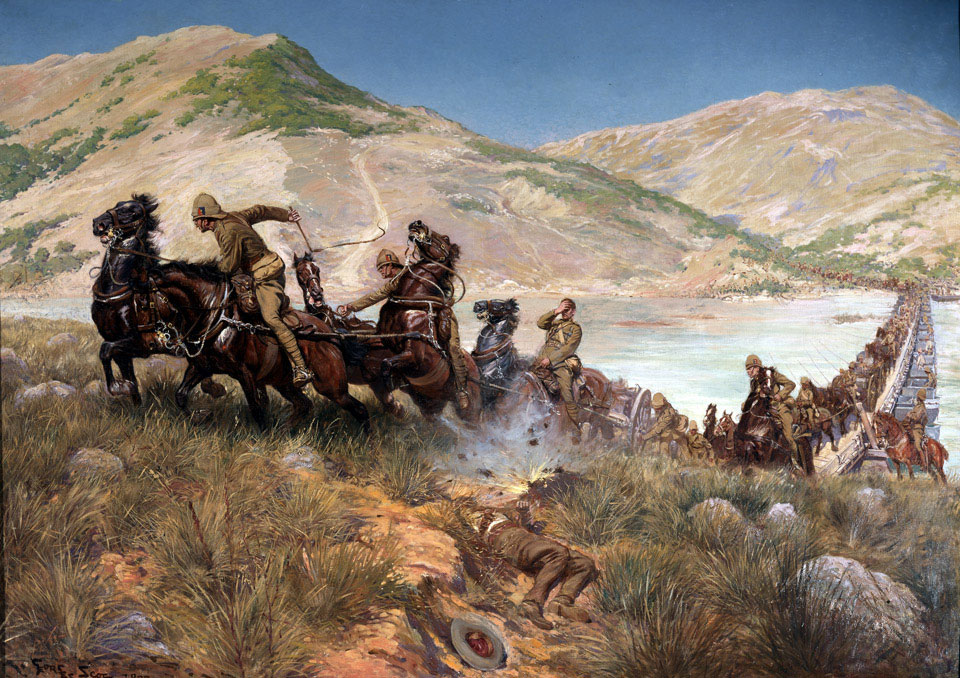 In November 1899, the Natal Field Force under Lieutenant-General (later Field Marshal) Sir George White (1835-1912) was besieged by the Boers in the town of Ladysmith. With White isolated, command of the British forces fell to General Sir Redvers Buller VC (1839-1908), who concentrated a force near Colenso, about 14 miles (22.5 kms) from Ladysmith.

Buller's first attempts to relieve the town resulted in the failures at Colenso (15 December 1899), Spion Kop (24-25 January 1900) and Vaal Kranz (5-7 February). However, the final and successful attempt began with the capture of Hlangwane Hill on 19 February. This gave the British forces command of the Tugela River. On the 22nd a steady advance was made on Pieter's Hill which was taken and held at the cost of heavy casualties. Buller then pivoted his whole army, swinging the centre and left back across the Tugela, before re-crossing it to turn the Boer left flank, thereby opening the way to relieve Ladysmith.

In order to complete this final crossing a pontoon bridge was thrown across the river. On 27 February, British forces poured across the bridge, under cover of artillery fire. Once the guns had done their work, the Royal Artillery followed, as shown in the painting.

This was one of three canvases which the French artist, Georges Scott, exhibited at Arthur Tooth and Sons' Gallery, Haymarket, London, in January 1901. Proceeds from ticket sales were 'for the benefit of 'The Daily Telegraph' war fund', and subscriptions were invited for photo-engravings of the pictures.