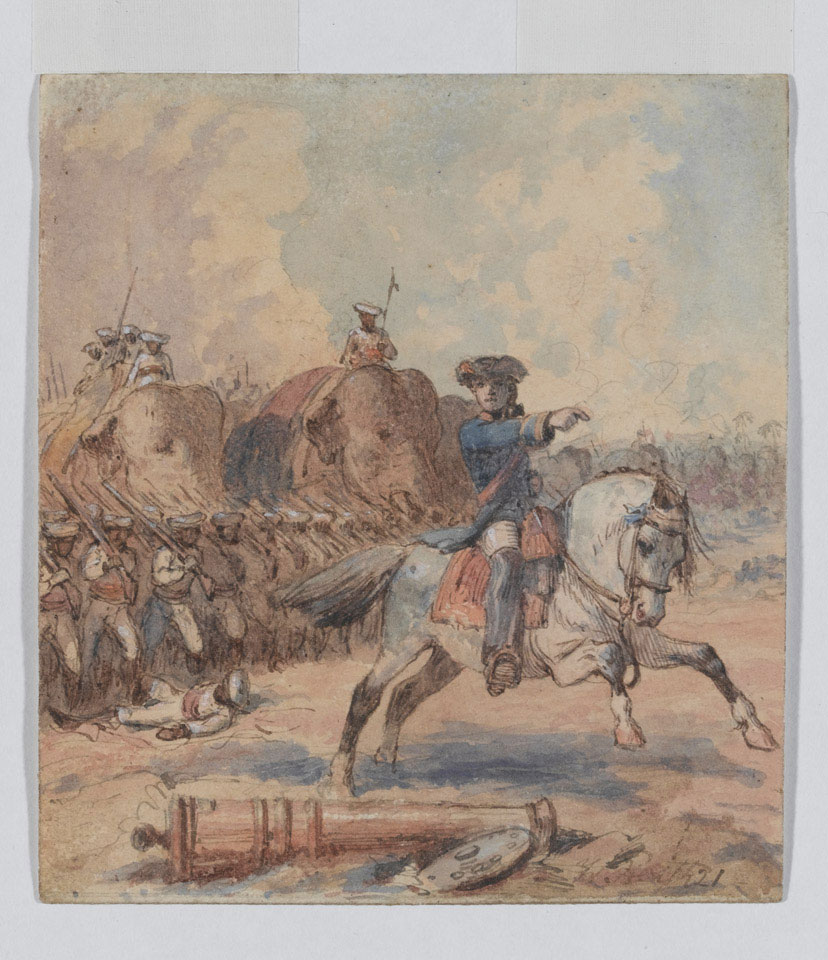 On 23 June 1757 the Nawab of Bengal's army confronted the East India Company's near the small village of Plassey (Palashi) about 100 miles north of Calcutta. The Nawab commanded 50,000 men, including artillery and artillery officers loaned by the French. The Company's army was about 3,000 strong, including 800 Indian troops. It was commanded by Lieutenant-Colonel Robert Clive. Formerly a writer (clerk), Clive had switched to the Company's military service and his tactical flair and personal bravery had earned him rapid promotion and a great personal fortune.

Siraj-Ud-Daulah, Nawab of Bengal had known that the East India Company wanted him removed for some time. A year before, when the Company refused to halt military preparations at its stronghold of Fort William in Calcutta, the Nawab attacked and captured the fort.

The Company and the British Army won Calcutta back by Christmas 1756. In the spring of 1757 the opposing armies skirmished and squared off. The Company decided a change of regime was needed to achieve its political and financial goals. It secretly offered to make Siraj's army chief, Mir Jafar, the new Nawab of Bengal, if Siraj was defeated in battle. On 23 June, in a grove of trees on the banks of the Bagirathi River, Mir Jafar got his chance.

The Nawab's opening cannonade was out of range, while various skirmishes were inconclusive. Most importantly, Mir Jafar, who commanded the Nawab's 16,000 cavalry, refused to take part in the battle. By the end of the day, Clive was in a position to rout the Nawab's disheartened forces.

After his victory at Plassey, the Company appointed Clive Governor of Bengal. He attempted to stamp out corruption and profiteering by Company employees - amongst other things he forbade the acceptance of the gifts which had made him so wealthy. In 1765, he secured for the Company the diwani (the right to collect the tax revenues) of Bengal, India's richest province. This confirmed British military supremacy in the region and gave the Company a political stake in India.