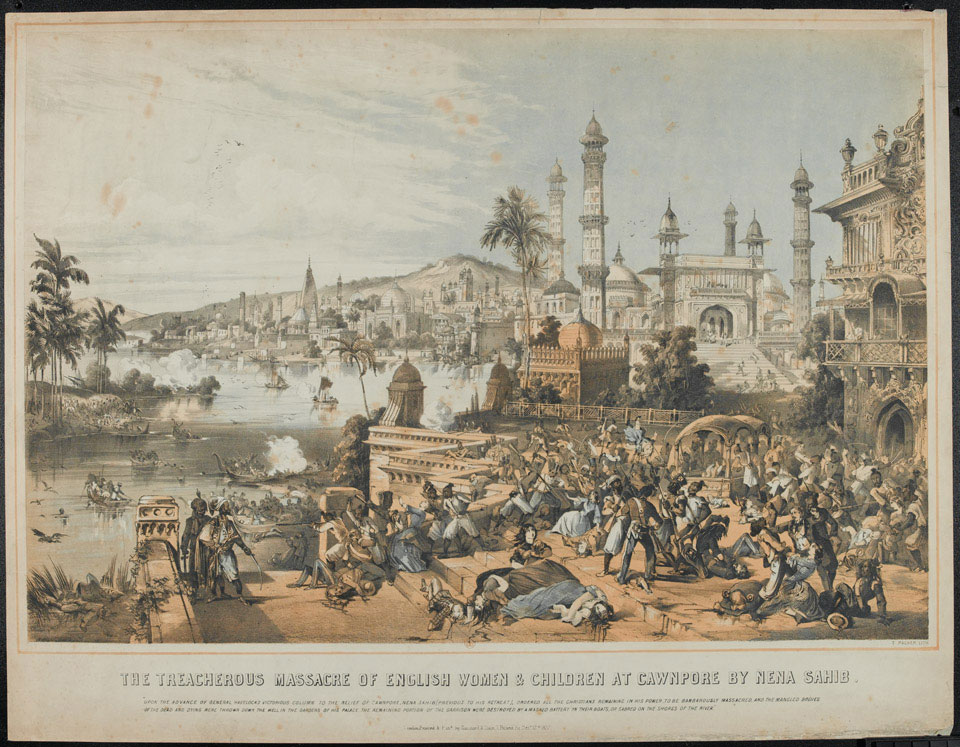 'The treacherous massacre of English women and children at Cawnpore by Nena Sahib', 1857

Cawnpore was a major crossing point on the River Ganges, and an important junction, where the Grand Trunk Road and the road from Jhansi to Lucknow crossed. In June 1857, during the Indian Mutiny (1857-1859), the Bengal Army sepoys stationed there rebelled, looted the treasury and laid siege to Major-General Sir Hugh Wheeler's garrison. Wheeler retreated to a dry earthen entrenchment just outside the city.

On 25 June, the leader of the rebels, Nana Sahib, offered safe conduct to the River Ganges for all those inside the entrenchment, and boats to take them down to Allahabad. Wheeler accepted, and two days later the Europeans marched out towards the landing stage (shown here). As they embarked in their vessels, a shot was heard. The Indian boatmen, instead of pushing off, jumped overboard and made for the shore. Fearful of treachery, the British immediately opened fire. The Nana's men replied with grapeshot and the boats were soon full of casualties. Most of the 60 men who survived the short battle were immediately killed by the Nana's troops. Wheeler was among the dead.

Despite the title of the work and its depiction of females being slain, most of the women and children survived the attack. They were kept as hostages in the days that followed, but were eventually killed in another, far more notorious massacre.