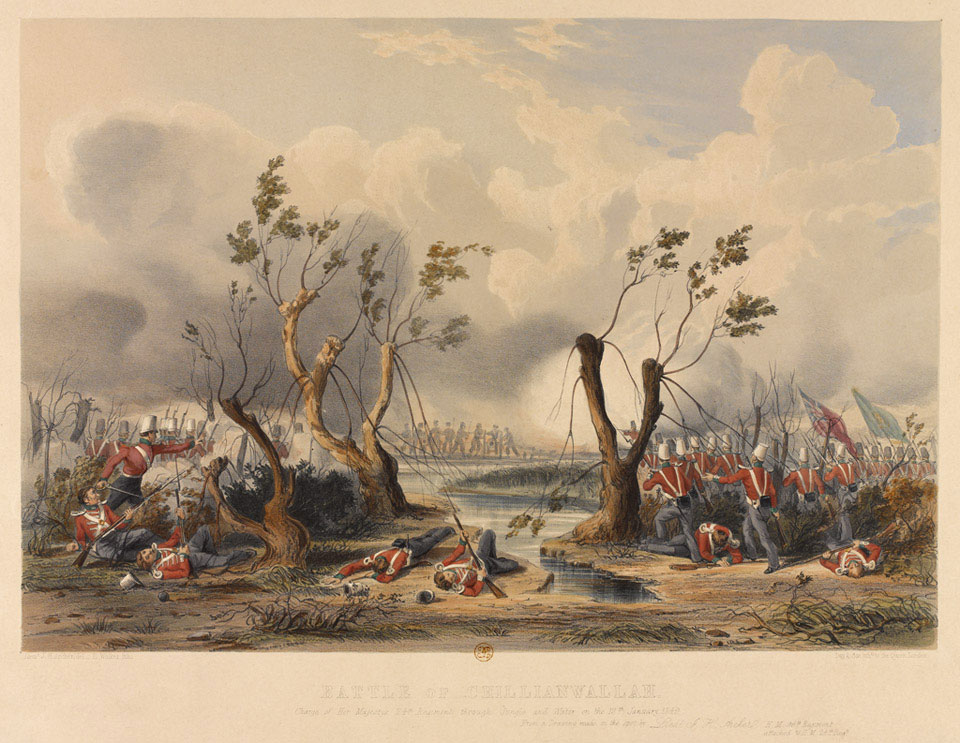 Coloured lithograph by Day and Son after E Walker from a drawing on the spot by Lieutenant J H Archer, 96th Regiment. Published by R Ackermann, 1849 (c).

On 13 January 1849, near the village of Chilianwala, north-west of Lahore, General Lord Hugh Gough, Commander-in-Chief India, led his army into the first major battle of the 2nd Sikh War (1848-1849). The 24th (The 2nd Warwickshire) Regiment of Foot and the 25th and 45th Regiments of Bengal Native Infantry advanced to attack the guns of the Sikh Army. Outstripping the native infantry, the 24th Regiment arrived upon the enemy prematurely but, under instructions not to fire, they fixed bayonets and charged the deadly artillery. In this gallant but foolhardy attack, the regiment suffered 515 casualties including 238 killed.

The battle almost ended in disaster when Lieutenant-Colonel Alexander Pope, commanding the 2nd Cavalry Brigade, gave an indistinct instruction which was interpreted as ordering a retreat: the brigade's flight was just halted by an Army chaplain. The enormous casualties which were inflicted on a larger and better-equipped force changed Indian perceptions of the invincibility of the British. However, the Sikh Army failed to drive home their advantage, so Gough claimed the battle as his victory.