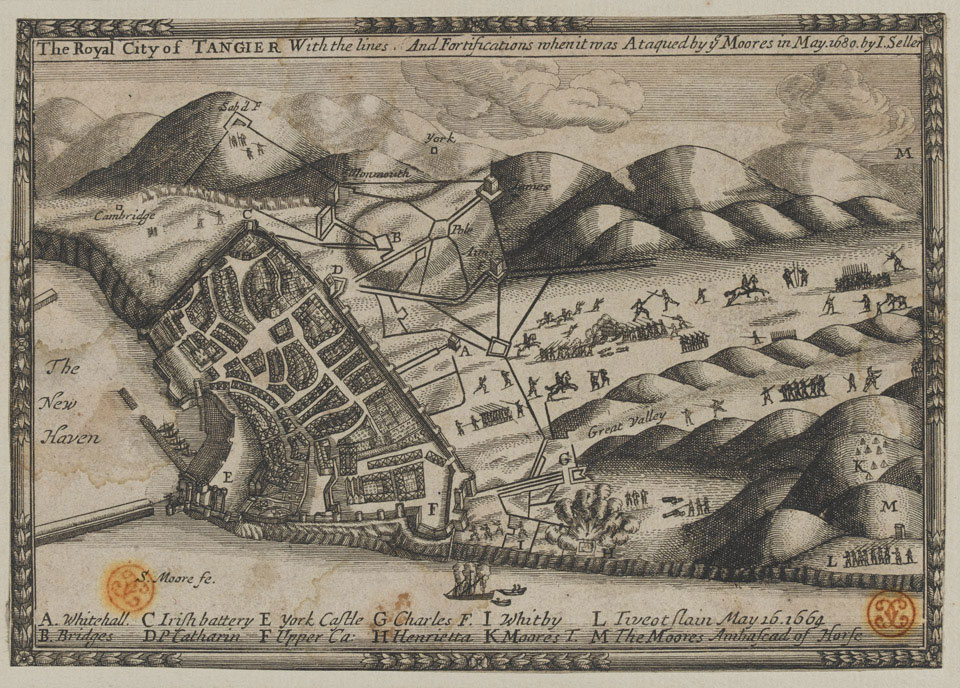 'The Royal City of Tangier with the lines and fortifications when it is was ataqued [sic] by ye Moores in May, 1680'

Tangier (in modern day Morocco) controlled entry into the Mediterranean Sea and was the main commercial centre on the North West coast of Africa. It became a British possession in 1661 via the dowry of King Charles II's new wife Catherine of Braganza. Charles appointed Henry Mordaunt, 2nd Earl of Peterborough, as Governor of Tangier. Mordaunt raised his own unit to garrison the settlement, the Earl of Peterborough's Regiment of Foot or 'Tangier Regiment'. This later became the 2nd (The Queen's Royal) Regiment. It remained there for the next 23 years. The 2nd were joined by other regiments, including the Earl of Plymouth's Regiment, later the 4th (The King's Own) Regiment. Mordaunt's main task was to protect merchant ships from Barbary pirates. To do this he ordered the construction of a fortfied harbour. He also strengthed the landward fortifications as Tangier was regularly attacked from that direction by Moorish raiders opposed to the British presence.

In 1676 a survey of Tangier, which was costing about £140000 a year to maintain, revealed that the inhabitants numbered 2225, of whom 50 were army officers, 1231 other ranks, with 302 army wives and children. Parliament was concerned about the financial cost of maintaining the Tangier garrison. The King's frequent requests for more troops for the garrison there raised suspicions that a standing army was being retained in Tangier to ensure a Catholic succession and absolute monarchy. In 1680 Parliament told the King that it would only grant supplies if he assented to a Bill of Exclusion to disinherit the Duke of York. The King refused to sacrifice his brother's right of succession to save Tangier. Preparations therefore began for evacuation. This was completed in 1684. Recognition for Mordaunt's men had to wait until 1909 when the Queen's Royal Regiment was granted the battle honour of 'Tangier 1662-80' which is the oldest in the Army.