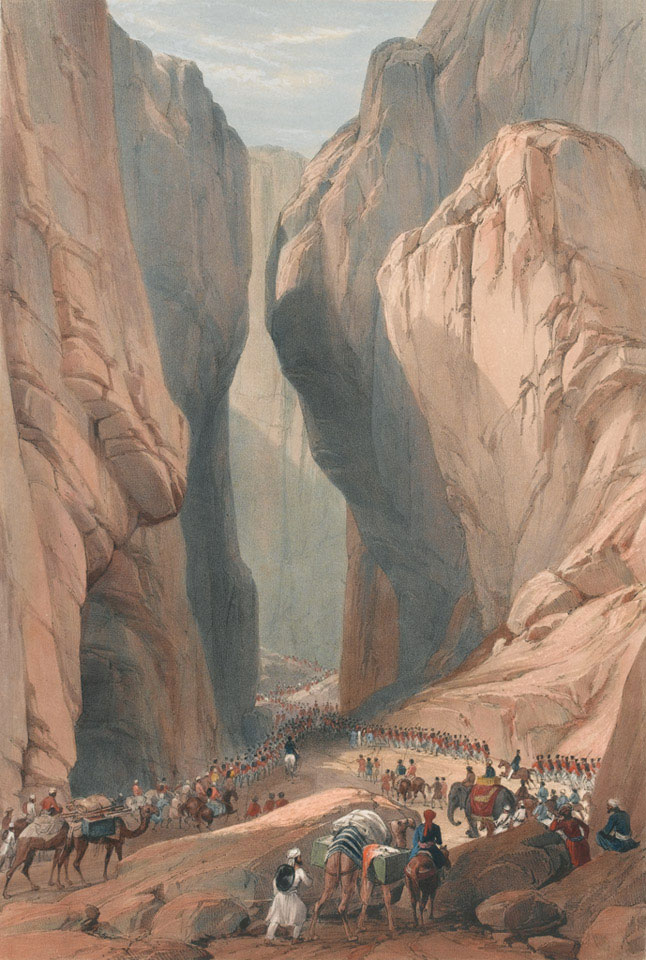 The Army of the Indus forcing the Bolan Pass, 1839

Tinted lithograph from 'Sketches in Afghanistan', 1838-42, by Louis and Charles Haghe after James Atkinson, published by Henry Graves and Company and J W Allen and Company, 1 July 1842.

Afghanistan's position between the Russian Empire and India meant that the British East India Company was anxious to ensure that a pro-British Emir was on the throne at Kabul. Fearful of a Russian invasion of India via the Khyber and Bolan Passes, in 1837 the British sent an envoy to Kabul to gain the support of the Emir, Dost Mohammed.

The Emir was in favour of an alliance, but when the British refused to help him regain Peshawar, which the Sikhs had seized in 1834, he prepared to talk to the Russians, who sent an envoy to Kabul. This led Lord Auckland, the Governor-General of India, to conclude that Dost Mohammed was anti-British. The decision was taken to replace him as Emir with a former ruler, Shah Shuja who was considered to be more pro-British. In spring 1839 a 12,000 strong British-Indian force, the Army of the Indus under Sir John Keane, forced the Bolan Pass and captured Kandahar without a fight. Soon after the fortress of Ghazni was seized. Dost Mohammed fled from Kabul and Shah Shuja was duly installed as Emir in August.