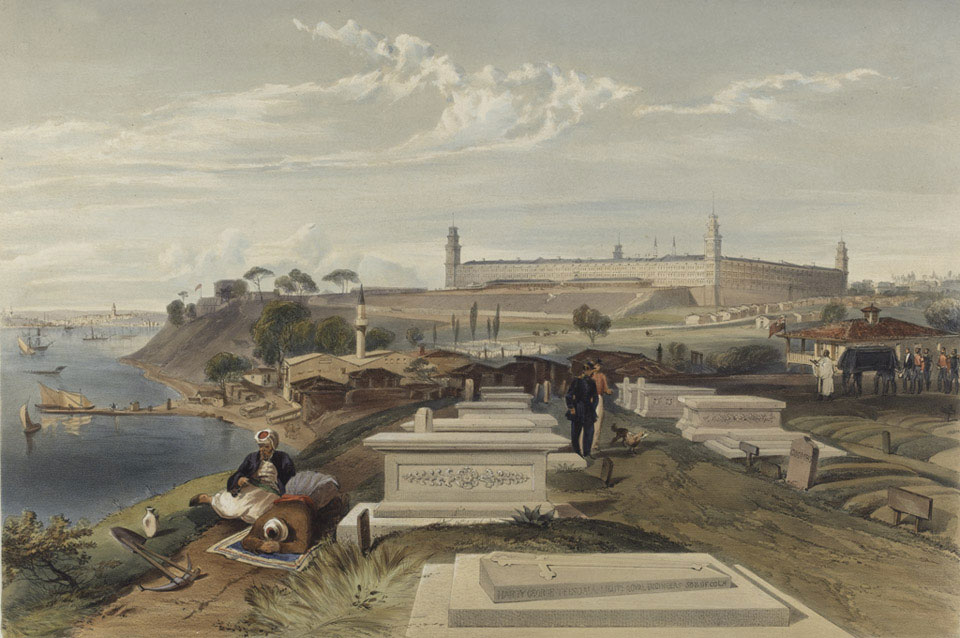 Coloured tinted lithograph by J Needham, 1856. One of 41 lithographs from 'The Seat of War in the East - Second Series', after William Simpson. Published by Paul and Dominic Colnaghi, 26 April 1856. Printed by Day and Son.

Scutari was situated opposite Constantinople on the Bosphorus coast of Turkey. During the first few months of the Crimean War (1854-1856) the hospital there was ill-equipped and the medical staff overwhelmed by the numbers of sick and wounded men. Soldiers sometimes lay untreated for weeks. Acting Assistant Surgeon Henry Bellew of the Army Medical Department described the conditions:

'The poor fellows endured their sufferings with heroic fortitude amounting in appearance to indifference to their fate... There has been somehow unaccountable neglect in the arrangements for this hospital. Until some hours after the arrival of the men there were neither stores, attendants nor the necessary refreshments on the spot. During this afternoon I attended single handed to the wounds and wants of 74 helpless men. From many, on my knees as they lay on the floor, I cut away the clothes as the easiest and safest way of ridding them of their filth and vermin'.

Following a public outcry over the condition of the Army in the East, Lord Palmerston's new government formed a sanitary commission consisting of Dr John Sutherland, Dr H. Gavin and Robert Rawlinson, a sanitary engineer, to investigate. They reached Constantinople in March 1855 and their changes, which included the repair of the hospital sewers and improved ventilation, helped reduce the death rate at Scutari by half within weeks. Conditions were also improved by the work of Florence Nightingale's nurses.