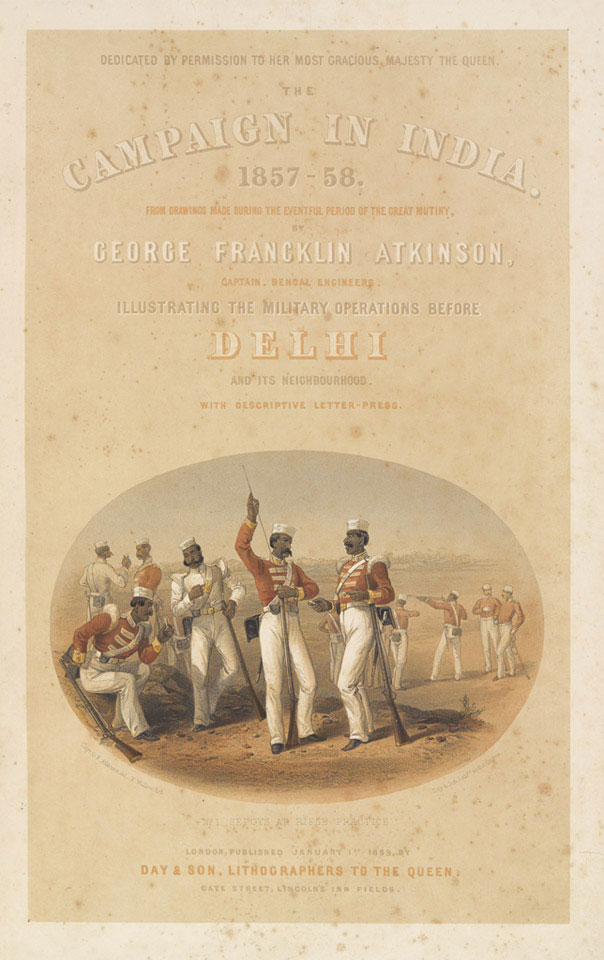 Coloured lithograph title page from 'The Campaign in India 1857-58', a series of 26 coloured lithographs by William Simpson, E Walker and others, after G F Atkinson, published by Day and Son, 1857-1858.

By 1857 the morale of the Bengal Army's Indian 'sepoys' (infantry) was very low. Unease had been increasing for years due to declining terms of service. Bad pay, the reduction of 'batta' allowances (foreign service pay) and poor pensions were the main concerns. This resulted in five serious mutinies in the Bengal Army between 1824 and 1852. Equally important was the declining relationship between native troops and European officers. Whereas an earlier generation of officers had been interested in the religion and culture of their men, by the 1850s there were few such individuals in the Bengal Army. Instead, officers of an evangelical persuasion had started preaching in the hope of converting sepoys to Christianity. Officers looked down on their men as racial inferiors, at best to be avoided in favour of European society.

Matters in the Bengal Army came to a head with the introduction of the Enfield Pattern 1853 Percussion Rifle Musket. The rumour spread that its cartridges, which had to be bit open before use, were, to facilitate loading, greased with pig and cow fat. This was deeply offensive to Moslems and Hindus. In February 1857 the 19th Bengal Native Infantry refused to use the new cartridges. They were quickly disbanded, but their actions sparked the Indian Mutiny (1857-1859), an uprising that almost toppled British rule in India.