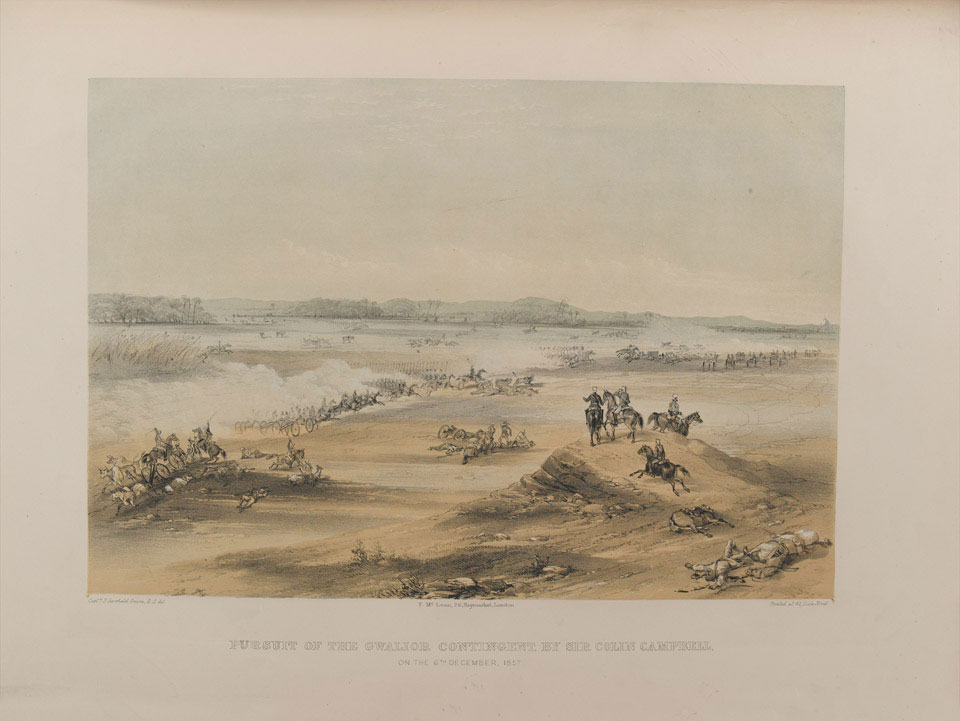 'Pursuit of the Gwalior Contingent, by Sir Colin Campbell, on the 6th Dec, 1857'

One of 20 lithographs, 'Views in India, from drawings taken during the Seapoy Mutiny', from drawings by D Sarsfield Greene, Royal Artillery. Published by Thomas McLean, 1859.

The Gwalior Contingent was a body of troops in the service of Maharajah Sindia, the pro-British ruler of Gwalior. During the Indian Mutiny (1857-1859), they rebelled against their British officers in June and July 1857 and threw in their lot with Nana Sahib, the Maharajah of Bithur.

After recapturing Cawnpore from the Nana, Lieutenant-General Sir Colin Campbell had marched most of his men off to Lucknow in November 1857, leaving behind a small detachment under Brigadier Charles Windham. Meanwhile, Tantya Tope had gathered a large army to recapture the city. Its core was the Gwalior Contingent. On 26 November Windham drove off Tantya's advance guard, but was then forced back to General Wheeler's old entrenchment at Cawnpore. Campbell's force then returned from Lucknow and found Windham surrounded and the rebels occupying the city. Sir Colin attacked on 6 December. Windham opened a bombardment to deceive the rebels that Campbell was about to attack their left. The real attack was made on the right to threaten their communications with Kalpi. Campbell's heavy naval guns were the decisive factor. As the Gwalior Contingent broke and fled, Nana Sahib's own men were defeated north of the city.