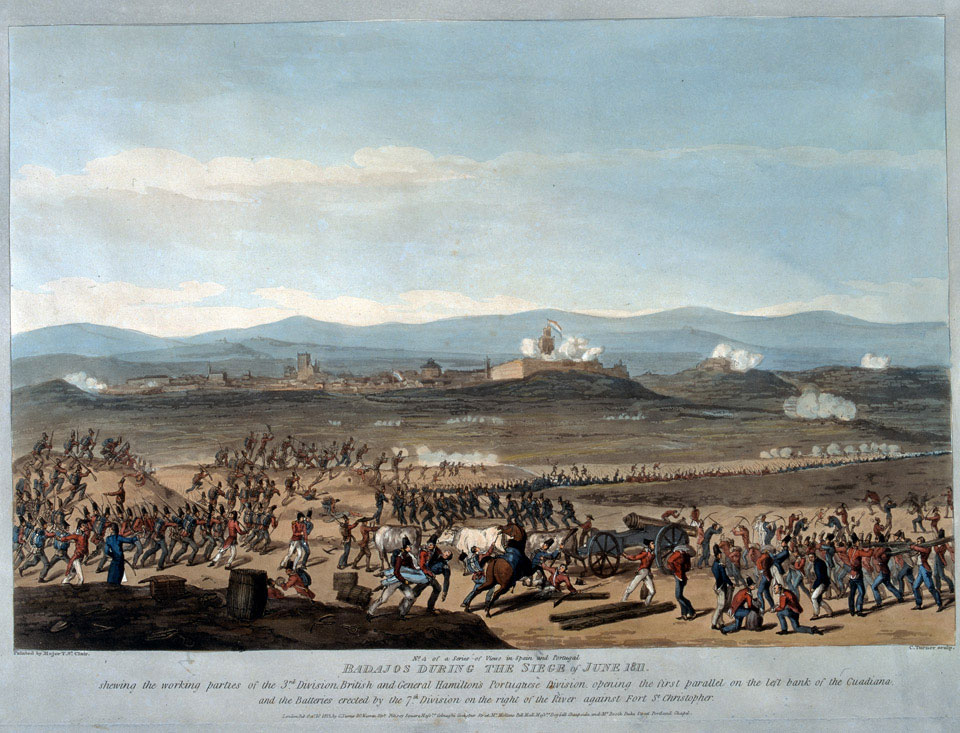 Badajoz during the Siege of June 1811

One of 16 aquatints engraved by C Turner after Major T St Clair, published by Turner, Colnaghi and Boydell 10 October 1812. No 4 in 'A Series of Views of the Principal Occurrences of the Campaigns in Spain and Portugal'.

Inscribed: 'Shewing the working parties of the 3rd Division British and General Hamilton's Portuguese Division opening the first parallel on the left bank of the Cuadiana, and the batteries erected by the 7th Division on the right of the river against Fort St Christopher'.

After invading Estremadura, Marshal Soult had captured the fortress town of Badajoz in March 1811 after a six week siege. An Allied army led by Field Marshal William Beresford had tried to retake the town, but his siege had been lifted after little more than a week by the need to move men south to engage Soult's army at Albuera on 16 May. The garrison at Badajoz was besieged once more though three days later by General Viscount Wellington. Had he possessed an adequate siege train and experienced military engineers, Wellington could probably have captured Badajoz fairly quickly, but his two assaults against the town's forts on 6 and 9 June were beaten back.

The siege continued, but on 17 June Marshal Marmont's Army of Portugal met Soult's Army of the South and Wellington now found himself threatened by a combined enemy force of over 60,000 men. On 20 June he called off the siege and pulled his 44,000 strong army back to Elvas. Badajoz was not captured by the Allies until the following year.