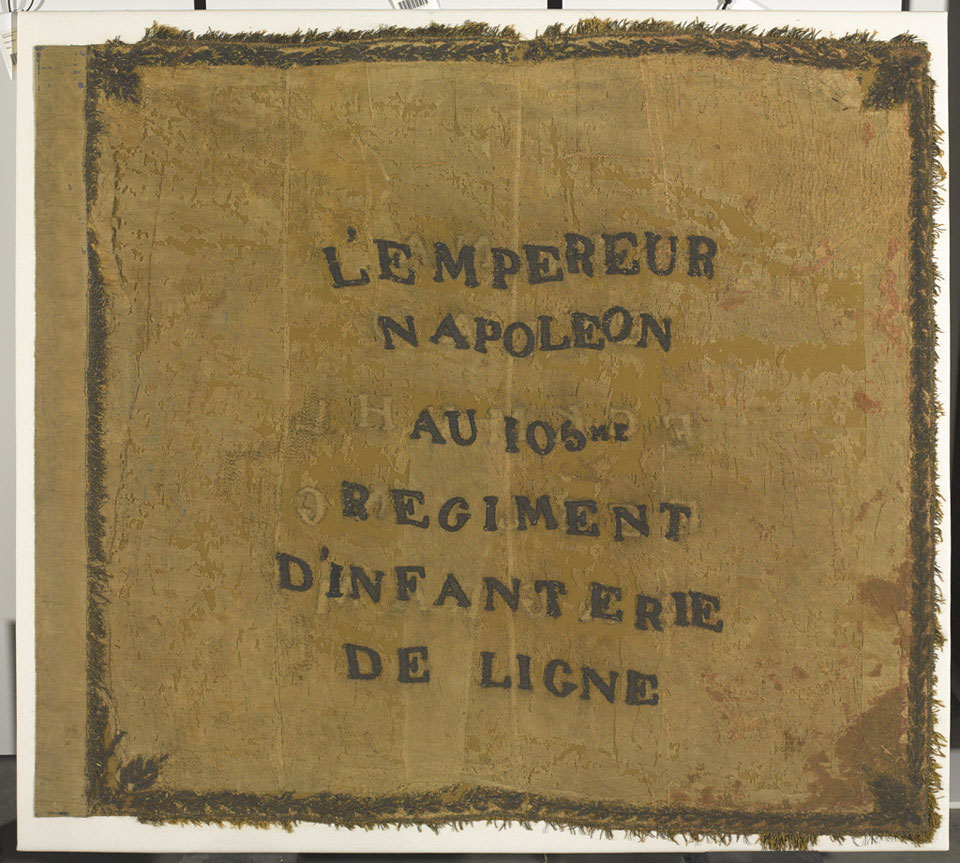 This is the banner from the standard of a French infantry unit, the 105th Regiment of the Line, which was captured by the British at the Battle of Waterloo (1815). It is embroidered with the name of the regiment and the name of the Emperor Napoleon, and edged with golden fringing. The banner was hung from a pole and topped by an eagle, the symbol of the French Empire and a source of regimental pride.

On the battlefield, the standard served as a rallying point for the troops, and was used by commanders to quickly identify their units in the chaos of combat. It was also a focus of the soldiers' pride: the banner recorded the battle honours of the regiment on the reverse side, and the men were meant to fight to the death rather than allow their standard to be captured.

After Napoleon was proclaimed Emperor in 1804, he needed to choose an emblem to represent the new French Empire. In the past, France had used the royal fleur-de-lis or revolutionary icons like the cap of liberty, but Napoleon wanted to symbolise his rule as being different, a new era for the French state. The eagle was chosen over the cock or the lion. The standards, each topped with a gilded Eagle, were the personal gift of the Emperor to each regiment in his armies.

When Napoleon was sent into exile on Elba in 1814, all the French Eagles were destroyed by the new government. The restored Bourbon monarchy wanted to eliminate any trace of the Napoleonic cult. New Eagles and standards had to be hastily created after Napoleon's return in early 1815, in the lead-up to the Battle of Waterloo. French defeat at Waterloo meant that these replacements were also destroyed by the twice-restored Bourbons. In some regiments the officers burned the standards, then mixed the ashes with wine and drank them.

This banner survived because it had been captured by the British at Waterloo, and taken back to London as the spoils of war.