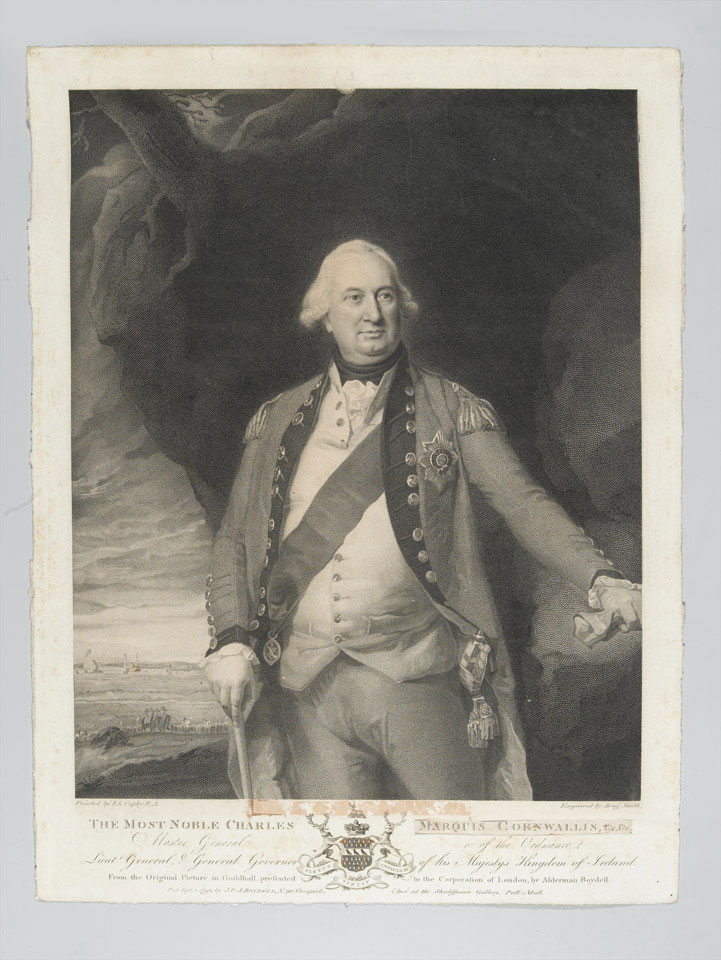 'The most noble Charles Marquis Cornwallis, Master General of the Ordnance, Lieutenant General, General Governor of his Majesty's Kingdom of Ireland'

Charles Cornwallis (1738-1805) was commissioned as an ensign in the 1st Foot Guards after gaining his education at Eton and Clare College. He served in Hannover, including the Battle of Minden (1 August 1759). He was promoted to captain in the 85th Foot, returned to England and was elected into parliament in 1760. He was sent to Germany as a Lieutenant-Colonel of the 12th Foot and served at Vellinghausen on 15 July 1761, Wilhelmsthal on 24 July 1762 and Lutterberg in July 1763. In 1762 he was given a place in the House of Lords following the death of his father, the 1st Earl of Cornwallis.

In 1765 he was made aide-de-camp to King George III and the following year was promoted to colonel of the 33rd Foot. In 1770 became constable of the Tower of London. In 1775 he was sent to America after his promotion to major general, where he fought in the battles of Charleston, Long Island, Kip's Bay, Fort Washington, Fort Lee, Princeton, Philadelphia, Brandywine and Germantown.

Cornwallis returned to Britain in 1778 where he was made a lieutenant general. He then returned to America as General Clinton's second in command and served at Monmouth, Charleston, North Carolina, Camden, King's Mountain, Cowpens, Guilford Courthouse, Virginia, Green Spring, Yorktown, Washington and Rochambeau. He returned to Britain and was made governor general of India in February 1786.

In this post he introduced several legal and administrative reforms and engaged in the 3rd Mysore War (1789-1792) against Tipu Sultan. For his services in this campaign he was created Marquess of Cornwallis in 1793. He returned to Britain in 1794 eventually taking up the post of Master of Ordnance. In 1798 he was appointed commander in chief and lord lieutenant of Ireland where he defeated the Irish rebellion and French invasion (1798). Cornwallis later returned to India as governor-general, but died in 1805 at Ghazipur.