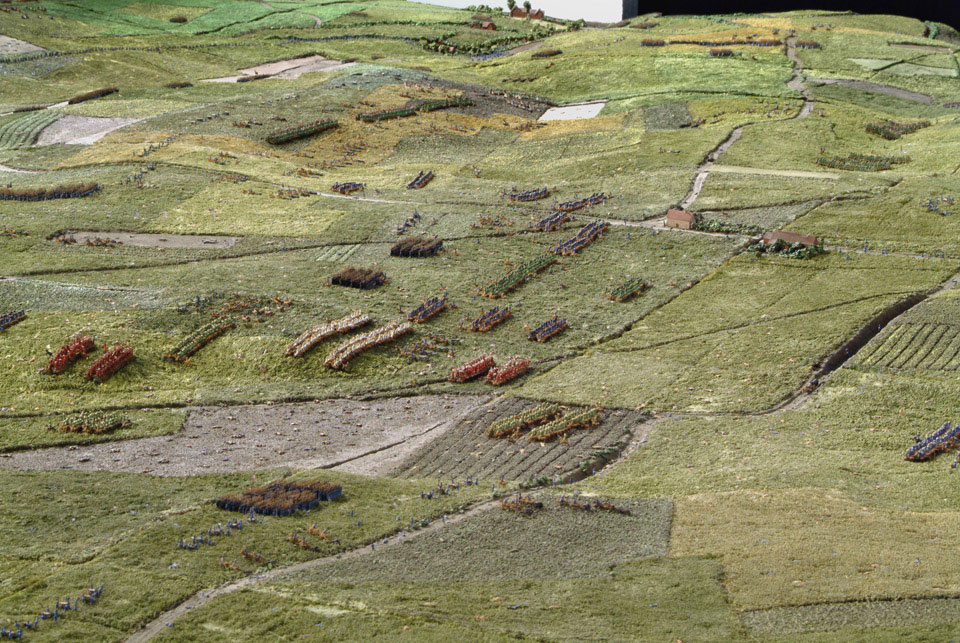 In 1830 Captain William Siborne obtained official approval for his suggestion that a model be constructed of the Battle of Waterloo. He took leave from the Army and undertook an eight-month survey of the battlefield. He then sent a circular letter to surviving British officers who had served at Waterloo. This asked them where their units had been at 'about 7 PM,' what enemy formations were to their front, what the crops were like in their vicinity, and inviting further comments about the parts played by their regiments.

About 700 replies were received and these formed the basis for Siborne's work. However, it is clear that he was highly selective of the evidence he chose to use. He does not appear to have attempted to obtain French and Prussian accounts and letters from the German officers in Wellington's Army were ignored. Much of the area occupied by the advancing Prussians is excluded and the model was clearly intended to be viewed from the British position. Nevertheless, it is a magnificent modelling achievement, and along with the archive of letters to Siborne which was its by-product, forms a unique piece of historical evidence.

The model was completed in Ireland in 1838 and shipped to England in 39 sections. It was assembled for public display in the Egyptian Hall, Piccadilly. Although the model attracted an estimated 100,000 visitors, paying one shilling each, receipts did not cover Siborne's costs. He was left seriously in debt. The model was returned to Ireland in 1841 and placed in storage. In 1851, a subscription was raised among the British regiments depicted and the model was purchased. It was brought back to London for display in the Banqueting Hall, Whitehall, as part of the Royal United Service Museum. When that museum was forced to close much of its collection, including the model, was presented to the National Army Museum.