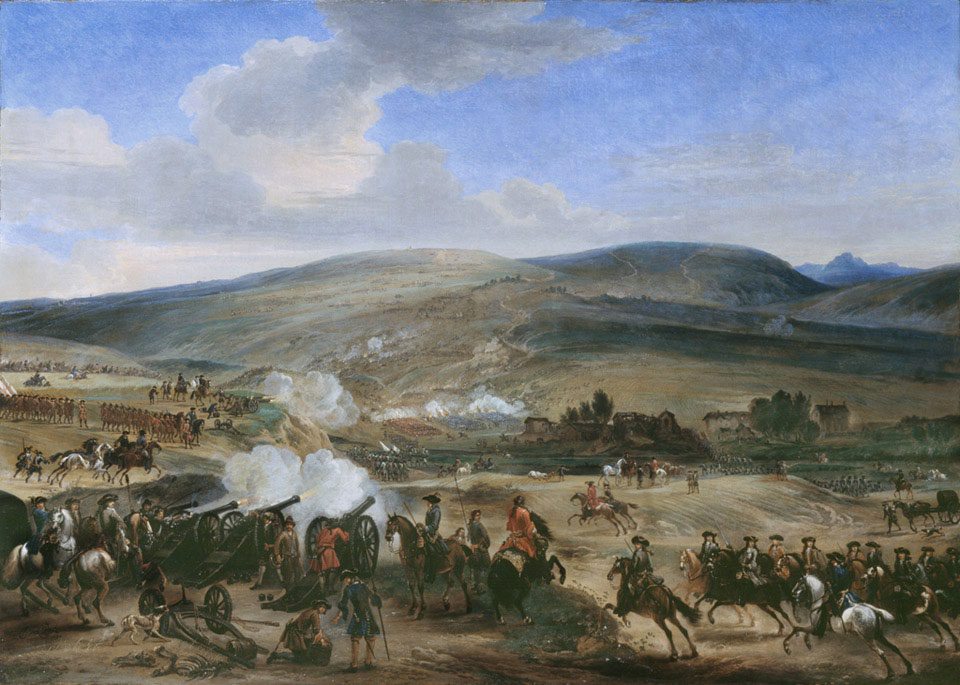 William III and officers in the right foreground, while his troops force the passage of the river in the middle distance.

King James II's (1633-1701) attempts to secure religious toleration for Roman Catholics, and the dismissal of Protestant officers from his Army, led a small group of Protestant statesmen amd Army officers to invite his son-in-law, William of Orange, to England. James fled and, in the 'Glorious Revolution' of 1688, a Protestant monarchy was reinstated under King William III and Queen Mary II.

The deposed king still had many supporters in Ireland. On 12 July 1690 (Modern Calendar; 1 July 1690 Old Style), his army met the forces of William III (1650-1702) by the Boyne River near the town of Drogheda, about 50 km (32 miles) north of Dublin. Despite stiff resistance, William's forces eventually broke through the Jacobite centre and right, causing a general retreat.

Although the Battle of the Boyne was later celebrated as a decisive victory for William, Jacobite casualties were comparatively light and the greater part of James's army escaped. The battle is a key event for the Protestants of Northern Ireland, particularly the 'Orange Order', but the celebratory marches marking the anniversary are seen by Republicans and Nationalists as highly provocative. As a result they were often marred by violent confrontations during the height of the 'Troubles'.