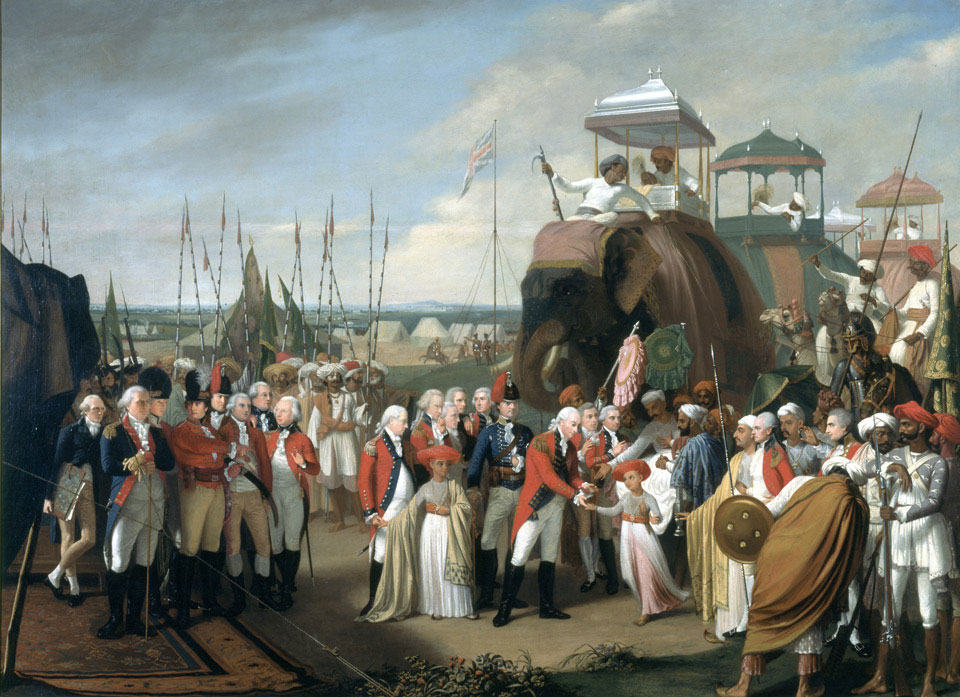 'The Reception of the Mysorean Hostage Princes by Marquis Cornwallis', 26 February 1792

During the 3rd Mysore War (1790-1792), a British force under Lieutenant-General Lord Cornwallis, Governor-General of India, besieged Tipu Sultan, ruler of Mysore, in his fortified island capital of Seringapatam. Tipu eventually made peace by ceding a large part of his dominions and a substantial financial settlement to the British. However, Cornwallis also demanded two of Tipu's sons as hostages to ensure that the Treaty was fulfilled.

The young Princes Abdul Khaliq (aged 10) and Mohin-ud-din (aged eight), left their father's city in some state, mounted on elephants in a procession led by camels and standard bearers, followed by an escort guard. They were received by Cornwallis with a 21-gun salute, and were each presented with a gold watch. In return, they gave him a fine Persian sword. In March 1794, on the fulfilment of his promises, the hostages were returned to their father.

In this painting of the event Cornwallis is depicted as a benevolent English gentleman, exercising direct paternal authority over a supposedly despotic oriental kingdom. After the excesses of the corrupt and greedy East India Company 'nabobs' (Britons who had become rich while living in India) in the 1760s and 1770s, this was a very rosy propaganda image indeed.

The artist accompanied Cornwallis's army in Mysore, producing numerous sketches of incidents on campaign. He also included a self-portrait, wearing a green jacket, with a portfolio under his arm, on the left of the painting.