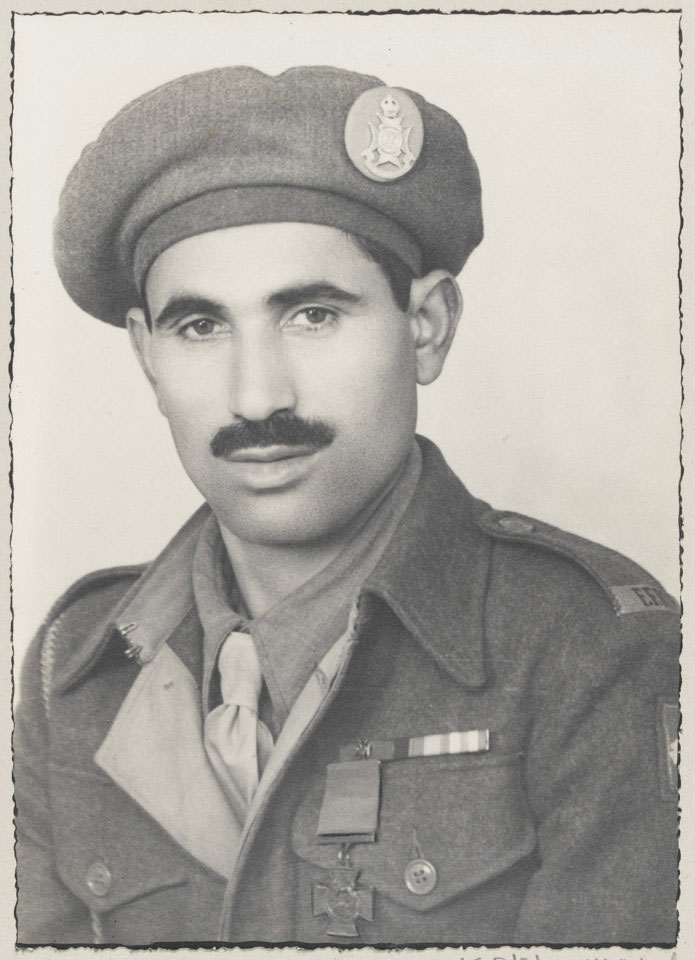 Ali Haidar (1913-1999) was a Pashtun soldier from Kohat who won the VC on 9 April 1945 near Fusigano in Italy during 8th Indian Division's crossing of the River Senio. According to the 'London Gazette' of 3 July 1945:

'In Italy, during the crossing of the River Senio, near Fusignano, in daylight on 9th April 1945, a Company of the 13th Frontier Force Rifles were ordered to assault the enemy positions strongly dug in on the far bank. These positions had been prepared and improved over many months and were mainly on the steep flood banks, some 25 feet high.

Sepoy Ali Haidar was a member of the left-hand Section of the left-hand Platoon. As soon as the Platoon started to cross, it came under heavy and accurate machine gun fire from two enemy posts strongly dug in about 60 yards away. Sepoy Ali Haidar's Section suffered casualties and only 3 men, including himself, managed to get across. The remainder of the Company was temporarily held up.

Without orders, and on his own initiative, Sepoy Ali Haidar, leaving the other two to cover him, charged the nearest post which was about 30 yards away. He threw a grenade and almost at the same time the enemy threw one at him, wounding him severely in the back. In spite of this he kept on and the enemy post was destroyed and four of the enemy surrendered.

With utter disregard of his own wounds he continued and charged the next post in which the enemy had one Spandau and three automatics, which were still very active and preventing movement on both banks. He was again wounded, this time in the right leg and right arm. Although weakened by loss of blood, with great determination Sepoy Ali Haidar crawled closer and in a final effort raised himself from the ground, threw a grenade, and charged into the second enemy post. Two enemy were wounded and the remaining two surrendered.

Taking advantage of the outstanding success of Sepoy Ali Haidar's dauntless attacks, the rest of the Company charged across the river and carried out their task of making a bridgehead. Sepoy Ali Haidar was picked up and brought back from the second position seriously wounded. The conspicuous gallantry, initiative, and determination combined with a complete disregard for his own life shown by this very brave Sepoy in the face of heavy odds were an example to the whole Company.

His heroism had saved an ugly situation which would - but for his personal bravery - have caused the Battalion a large number of casualties at a critical time and seriously delayed the crossing of the river and the building of a bridge. With the rapid advance which it was possible to make the Battalion captured 3 officers and 217 other ranks and gained their objectives'.

Ali Haidar was invested with his VC by King George VI at Buckingham Palace on 30 October 1945.