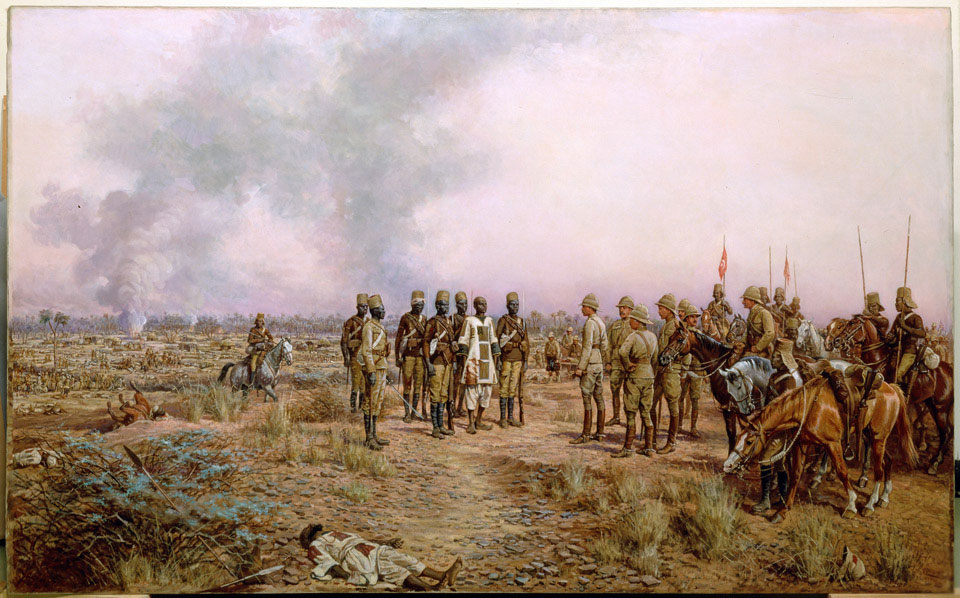 After the battle. The Emir Mahmud brought prisoner to Herbert Kitchener, Atbara, 8 April 1898

The Battle of Atbara was the turning point in the Second Sudan War (1896-1898). The re-conquest of the Sudan was complete by September 1898, when the Dervishes were defeated at the Battle of Omdurman.

In 1883, the Sudanese religious leader, Muhammad Ahmad (or the Mahdi), began a revolt against Anglo-Egyptian rule in Sudan. The following year, Major-General Charles Gordon, Governor-General of the Sudan, was sent to evacuate Egyptian forces from Khartoum. However, in January 1885, Gordon was besieged and murdered. His head was paraded on a pike in the Mahdi's camp, but his body was never found. The British public regarded Gordon as a martyr and the Government was put under great pressure to avenge his death. In 1892, Major-General Sir Horatio Herbert (later Field Marshal, 1st Earl) Kitchener was made sirdar or commander-in-chief of the Egyptian Army and set about reforming it with the aim of conquering the Sudan. In 1896 an Anglo-Egyptian expeditionary force entered the country and fought its way along the Upper Nile.

This painting shows the aftermath of the Battle of Atbara. Kitchener's force of about 12,000 had attacked the fortified camp of the Dervish army and, after a fierce struggle, the enemy was routed. Around 4,000 Dervishes were captured along with their commander, the Emir Mahmud, who is shown in the centre of the picture. The artist, Giles, based this painting on contemporary photographs of the Emir and the battlefield.

As a young man Winston Churchill (1874-1965) fought in the campaign and thought that the war was justified. Later in his book, 'The River War', (1899), he expressed reservations about its conduct. He described the Emir as 'a tall, strong Arab, about thirty years old, a fine specimen of proud brutality, worthy perhaps of some better fate than to linger indefinitely in the gaol at Rosetta'.