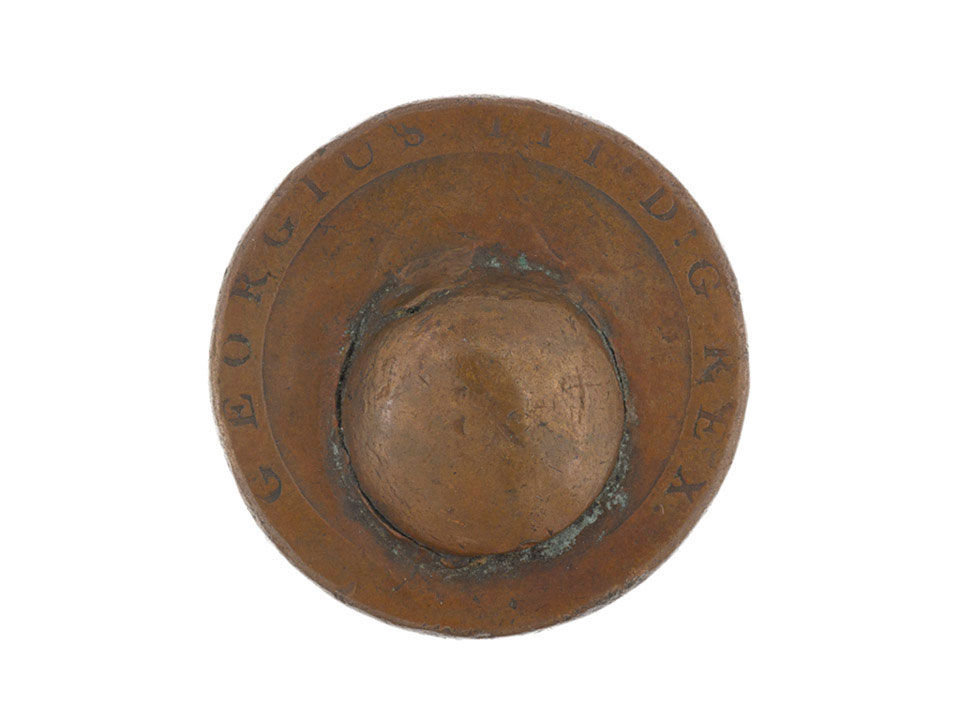 Penny dented by a bullet, Battle of Waterloo, 1815

This King George III Cartwheel penny was probably taken from the pocket of an infantryman at Waterloo. The penny had been hit by a musket ball at right angles denting the copper and bringing the ball to a complete stop, thus probably preventing the man's death. Nothing is known of the soldier concerned. He was possibly killed in action, even if not perhaps by the ball that hit the penny.

These massive penny coins were minted in Birmingham. They display George III facing right on one side and Britannia facing left on the other. The idea behind the penny's broad raised rim was to protect the coin from wear. The 'Incuse Inscriptions' (punched into the metal rather than standing proud) were designed to make forgery more difficult because previous pennies were widely forged.

These large, heavy pennies (weight 10 oz avoirdupois, diameter 36mm and 5mm depth) were designed to restore confidence in the coinage. The intrinsic value of the copper content plus production costs equalled the nominal value of the coin. They were struck over several years but always carried 1797 as the date.

Today each penny would be worth approximately £1.50, based on the relative cost of bread. An infantryman in 1800 would be paid 8d a day but after 'off reckonings' or deductions for uniforms etc and 'stoppages' including taxes to the Paymaster General, he would be lucky to left with 5d or approximately £7.50.