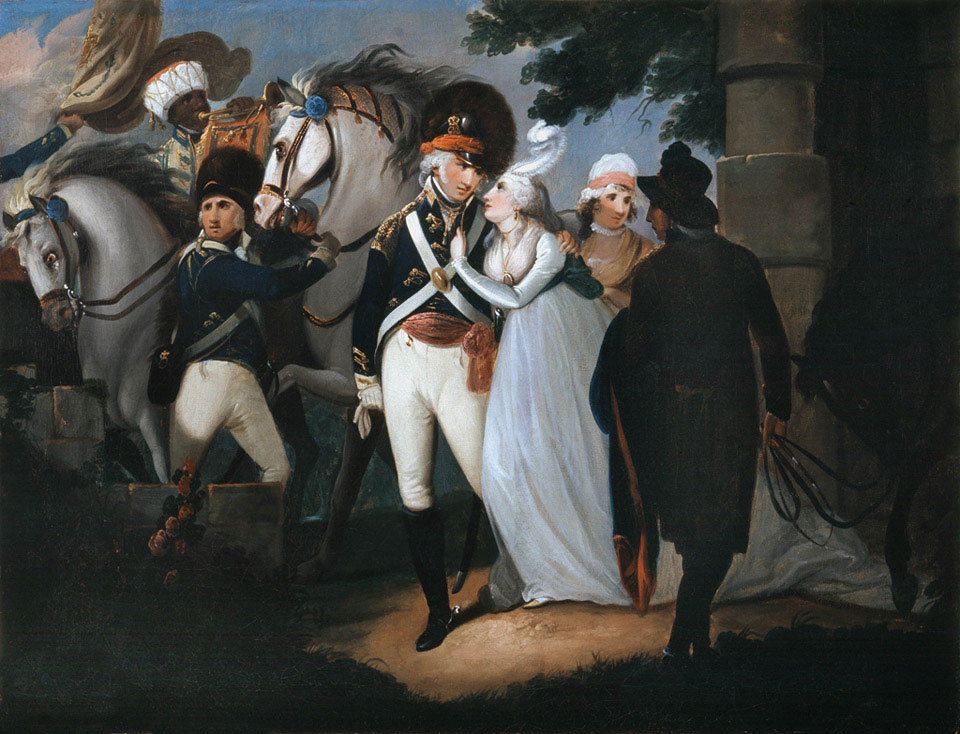 An officer of light dragoons taking leave of his wife, 1795 (c)

In this romantic scene, the details of the light dragoons' uniforms, although carefully depicted, do not identify any particular unit. In 1795 there were two regular regiments of light dragoons with white facings but with silver, not gold, lace. Other, local, light cavalry units of Yeomanry, Provisional Cavalry and Fencibles existed at this time, but they did not serve overseas.

As the officer and his wife in evening dress take a last embrace, the scene is reminiscent of the Duchess of Richmond's Ball. This took place some 20 years later in Brussels on 15 June 1815, the eve of the Battle of Quatre Bras and two days before the Battle of Waterloo. The ball was attended by many British officers and, when the Duke of Wellington arrived and confirmed the rumours of a French advance, many hurried away to prepare, while others remained, later leaving directly for the field of battle.

Singleton showed artistic promise at an early age and, aged only ten, he exhibited an ink drawing, 'A Soldier returned to his Family', at the Society of Artists. He specialised in portraits, and paintings of literary or contemporary historical subjects, showing over 280 paintings at the Royal Academy. Singleton and his contemporaries Robert Smirke, George Morland and Francis Wheatley produced a number of military genre paintings, usually decorative scenes of smart young soldiers, pretty maids, swooning wives and sobbing children. They were designed for reproduction as prints for the popular market, although no print of this painting has been traced.