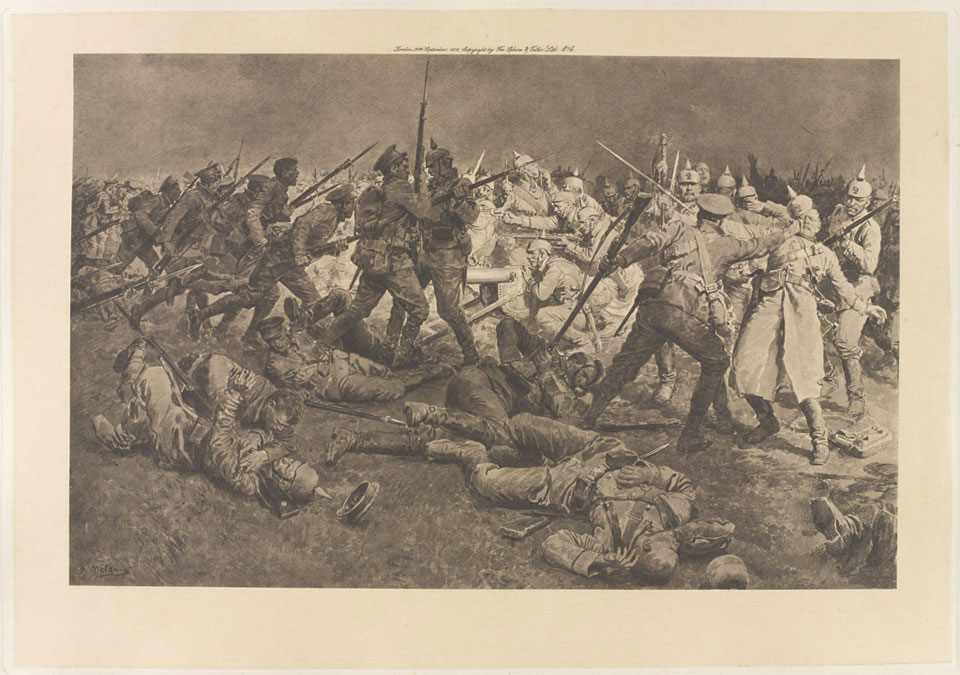 Photogravure after Fortunino Matania. Published by The Sphere and Tatler Limited, 1916. From the series 'With the British Army on the Western Front'.

This print depicts a famous episode from the First Battle of Ypres (20 October-22 November 1914). On 11 November at Nonne Bosschen the British stopped the Prussian Guard from breaking through to the coast. The text that accompanied the print stated:

'The searchlights showed the Germans advancing straight on the Allies, a few hundred yards to the south of Zonnebeke. The attacking troops were exclusively composed of the Prussian Guard. Suddenly the German ranks opened and the machine-guns appeared. The situation was critical, and the British general immediately gave the order for a bayonet charge.

A colonel dashed forward at the head of his regiment crying, "For honour and England". The opposing front ranks met in a terrible shock, and the bayonets frequently went home at the same moment. This hand-to-hand combat lasted for an eternal half-hour, and the troops, on both sides fought with the grimmest determination. Before the irresistible onslaught of the British soldiers the Prussian Guard reeled and broke'.

Matania's wartime illustrations were published in many different journals and newspapers so millions of readers in Britain and abroad had their vision of what the Western Front and its soldiers looked like defined by his work.