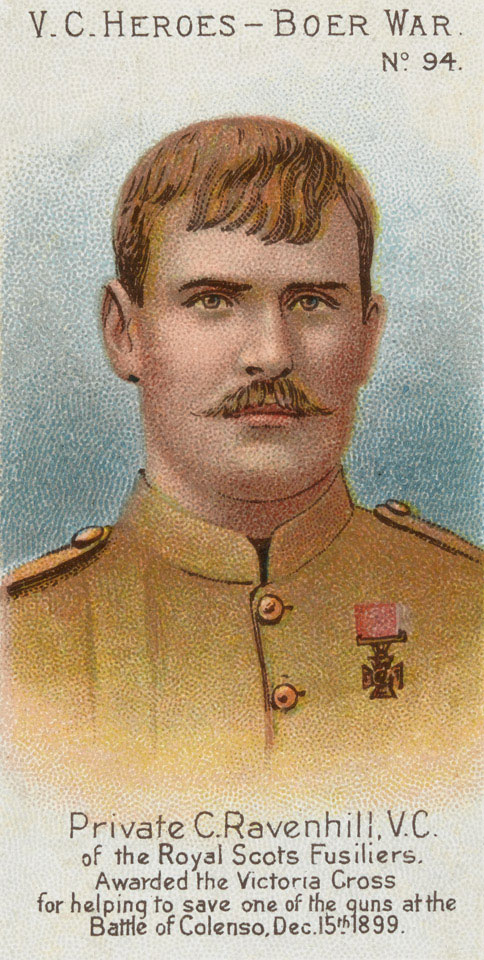 Portrait of Private George Albert Ravenhill (1872-1921), bareheaded, wearing his Victoria Cross. Ravenhill joined the Army using the Christian name 'Charles' hence the discrepancy in the name on the card. The caption below the portrait summarises his act of gallantry in South Africa.

Ravenhill was serving with 2nd Battalion The Royal Scots Fusiliers when he won the Victoria Cross (VC) in South Africa. His citation in 'The London Gazette' (4 June 1901) declared:

'At Colenso, on the 15th December, 1899, Private Ravenhill went several times, under a heavy fire, from his sheltered position as one of the escort to the guns, to assist the officers and driver's who were trying to withdraw the guns of the 14th and 66th Batteries, Royal Field Artillery, when the detachments serving them had all been killed, wounded, or driven from them by infantry fire at close range, and helped to limber up one of the guns that were saved'.

Ravenhill was wounded in the forearm during the attempt to save the guns. He received his cross from the Duke of York on 4 June 1901 at Pietermaritzburg. Ravenhill's VC was later forfeited in 1908 after he was imprisoned for theft and could not afford to pay the ten shilling fine. His VC pension was also withdrawn. He later died in poverty at the age of 49 in Birmingham.

From a collection of 14 cigarette cards.