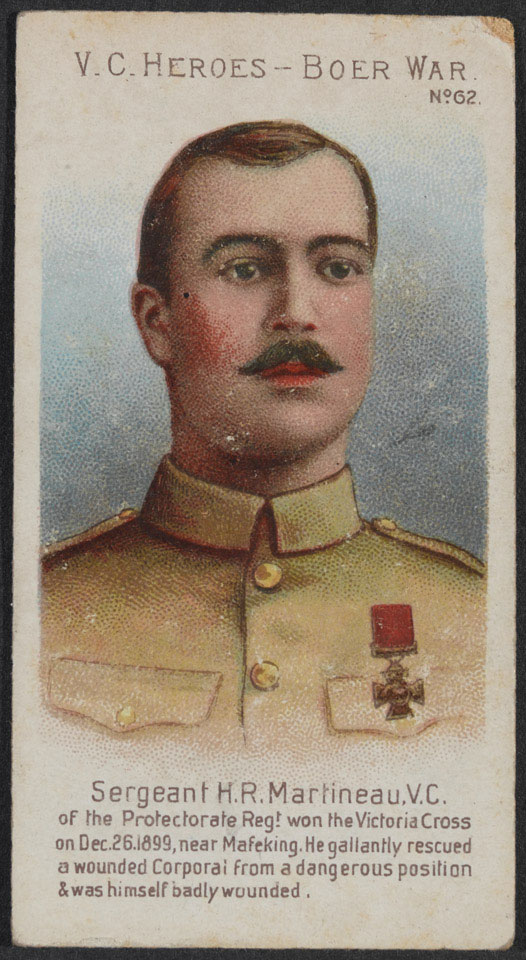 Horace Robert Martineau (1874-1916) was born and educated in London. In 1891 he enlisted in the 11th Hussars (Prince Albert's Own), serving in Natal and India before buying his discharge and returning to South Africa in 1895. The following year he served in Colonel Sir Robert Baden-Powell's campaign against the Matebele, after which he joined the Cape Police. Following the outbreak of the Boer War (1899-1902) he joined the Cape Colony's Protectorate Regiment.

Martineau was awarded the Victoria Cross (VC) following an action near Mafeking. His citation in the 'London Gazette' of 6 July 1900 stated:

'On the 26th December, 1899, during the fight at Game Tree, near Mafeking, when the order to retire had been given, Sergeant Martineau stopped and picked up Corporal Le Camp, who had been struck down about 10 yards from the Boer trenches, and half dragged, half carried, him towards a bush about 150 yards from the trenches. In doing this Sergeant Martineau was wounded in the side, but paid no attention to it, and proceeded to stanch and bandage the wounds of his comrade, whom he, afterwards, assisted to retire. The firing while they were retiring was very heavy and Sergeant Martineau was again wounded. When shot the second time he was absolutely exhausted from supporting his comrade, and sank down unable to proceed further. He received three wounds, one of which necessitated the amputation of his arm near the shoulder.'

Martineau was invested with his VC by Lord Roberts at Cape Town on 11 December 1900. After recovering from his wounds he joined the African Boating Company in Durban. Upon the outbreak of the First World War he was living in New Zealand and immediately joined the 14th (South Otago) Regiment. He served as a transport officer in Suez and Gallipoli. It was while he was in Gallipoli that he contracted a fever, fell seriously ill, and was invalided back home to New Zealand. He eventually died from the fever on 8 April 1916.

One of a collection of 14 cigarette cards.