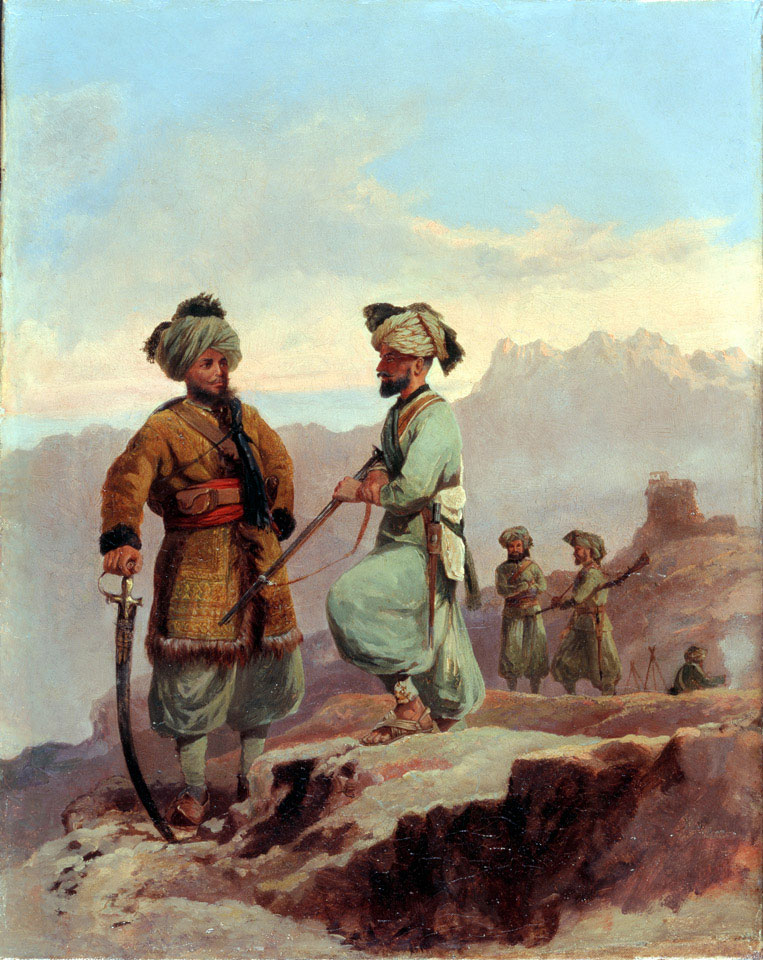 The two principal sitters were sketched from life and named by the artist, Major Walter Fane, on the back of the canvas. The officer to the left is Subadar-Major Jaie Singh, (a Dogra Rajput) who enlisted on 27 March 1849. He was awarded the Order of British India and was pensioned on 30 April 1878. In the centre is Havildar Mir Alum (an Afridi), who rose to the rank of Jemadar and served in the 2nd Afghan War (1878-1880). In the background are two Pathan sepoys.

Originally termed the 8th Regiment of Punjab Infantry, the 20th (Punjab) Regiment of [Bengal] Native Infantry was raised during the Indian Mutiny (1857-1859), by Lieutenant Charles Henry Brownlow (1831-1916). Fane presented this painting to Brownlow, who commanded the regiment until 1872.

Fane, too, had seen service in the Indian Mutiny, taking part in the pursuit and capture of the rebel leader, Tantia Topi. In 1860 he also raised a regiment of irregular cavalry for the 2nd China War (1856-1860). Known as 'Fane's Horse', by 1861 it had become the 19th Regiment of (Bengal) Cavalry, although Fane was still Commandant. Brownlow also served in the 2nd China War, so it is very probable that the two men knew each other for some years. However it is not known exactly when or where this painting was executed since, in the late 1860s, Brownlow's regiment was not stationed in the same district as either Fane's irregular cavalry or the unit he was serving with, 11th (Madras) Native Infantry.