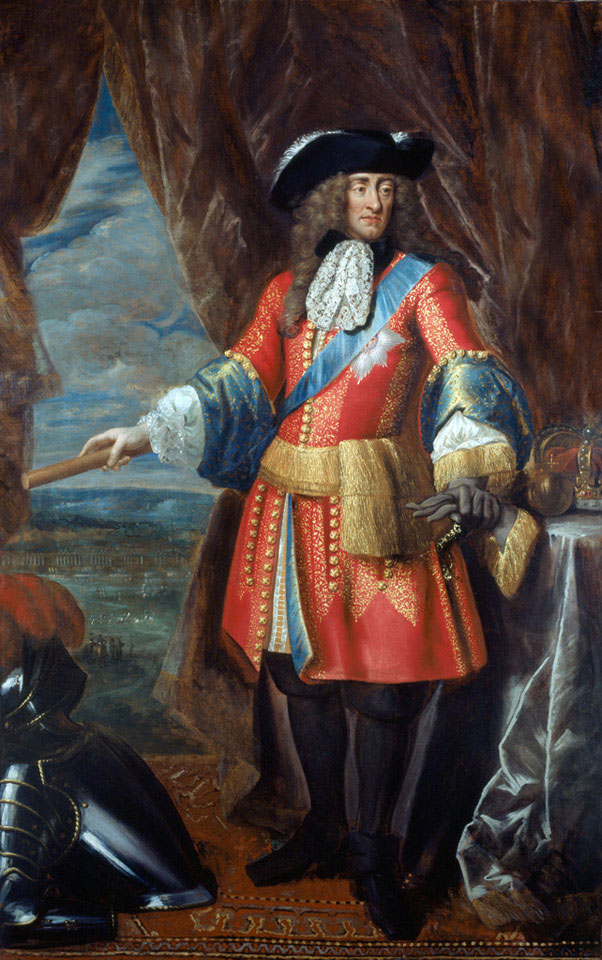 This painting identifies King James II (1633-1701) in his role as head of the Army. He wears a General Officer's State coat, and the lines of troops in the distance probably refer to the annual review of the Army which took place on Hounslow Heath, outside London.

James II's brief reign from 1685 to 1688 witnessed a considerable growth in the English Standing Army. As a Roman Catholic, James preferred his regiments to be officered wherever possible by fellow Catholics, whom he regarded as the most loyal. He also relied on a number of Protestant career-soldiers whom he believed would be loyal to the crown. However a key group of these men, including John Churchill (later Duke of Marlborough), became disaffected, objecting to the King's attempts to Catholicise the Army in defiance of the Test Act and his religious policy in general. Unfortunately for the King, they concluded that their interests would be better served by William Prince of Orange (1650-1702), the husband of James's Protestant daughter Princess Mary (1662-1694).

In 1688, William invaded England at the invitation of these officers, to prevent an alliance with his enemy, King Louis XIV of France, and to secure his wife's inheritance. William secured an almost bloodless victory in England through the defection of troops to his cause, though there was subsequently bitter fighting in Ireland and Scotland. Disgusted by this act of betrayal, James fled to France, where he lived in exile at St Germain. With this 'Glorious Revolution', William and Mary succeeded to the throne.