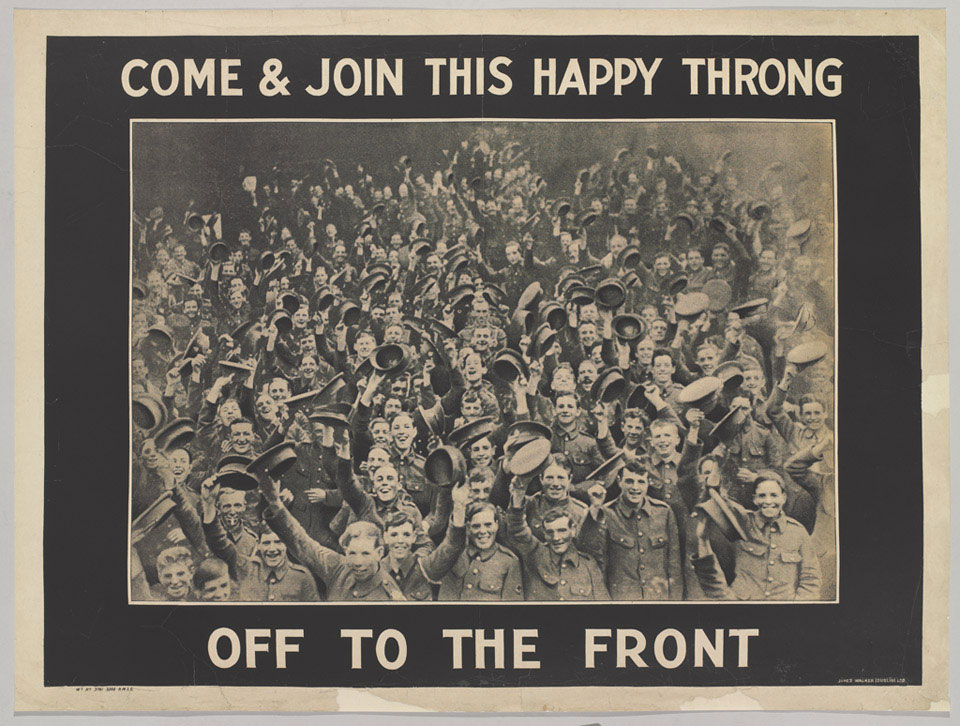 This poster was printed in Dublin for the Irish recruiting campaign. It features a large number of Irish soldiers smiling and raising their caps in a welcome to potential new recruits. Despite initial support from both nationalist and unionist leaders, recruiting in Ireland was always problematic. Even so, over 200,000 Irishmen joined up from both the Catholic and Protestant communities, collectively suffering over 30,000 casualties by the war's end.

Recruiting in Ireland was most successful in 1914 and early 1915. But the number of casualties suffered by the 10th Irish Division in Gallipoli in 1915 badly affected Irish recruitment and, when Pope Benedict XV condemned the war in July 1915, Roman Catholics began withdrawing their support. Reports also filtered back to Ireland of Irish soldiers receiving unfair treatment from their British commanders.

By the middle of 1915 recruiting was no longer providing enough volunteers from across the whole United Kingdom. The Military Service Act 1916 introduced conscription for England, Scotland, and Wales, but Ireland was exempt because of the declining support for the war effort there. The ongoing debate over Home Rule and the religious and geographic divisions within Ireland also lingered in the background, eventually leading to the Easter Rising of April 1916. Prior to the Rising these differences were largely overlooked, but that event shook and re-shaped Ireland and its relationship with the United Kingdom forever.