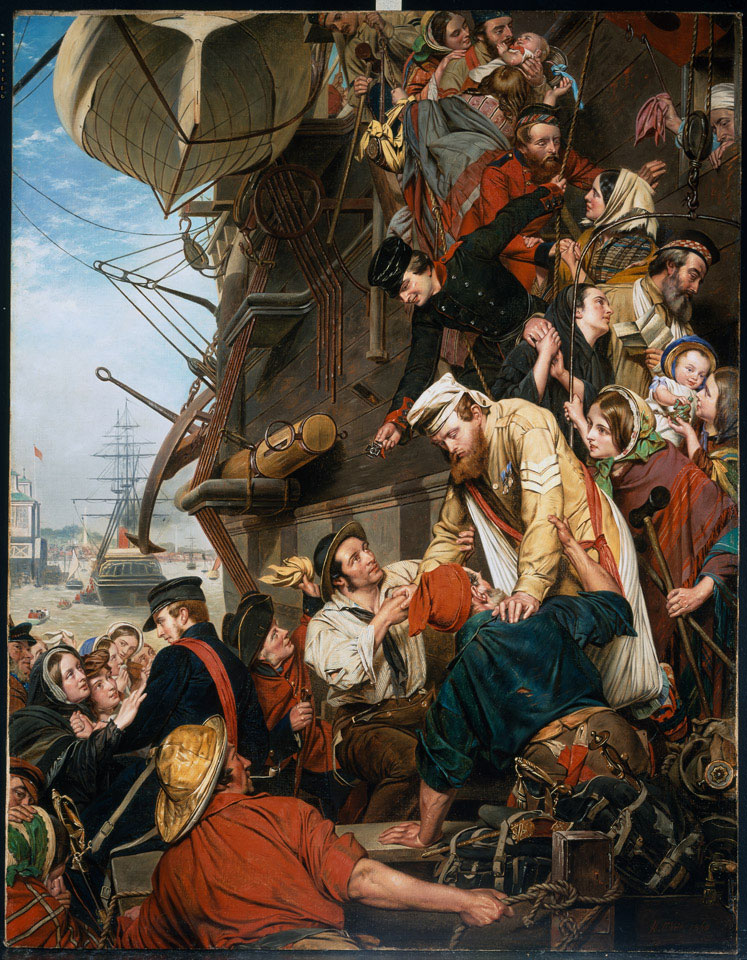 Soldiers disembark from a troopship at Gravesend, on their return from the Indian Mutiny (1857-1859). About 40,000 British troops were sent to India, more than had been mobilized for the Crimea, to suppress the mutiny among the Indian troops of the East India Company's Bengal Army.

Descending from the troopship, a young woman peers over the shoulder of a bearded infantry corporal, who holds their baby for the first time. A young soldier of the 60th (The King's Royal Rifle Corps) leans down, proffering his Victoria Cross to an In-Pensioner of the Royal Hospital Chelsea. In the centre, sailors assist a wounded sergeant to disembark. He wears a Kilmarnock 'pork-pie' cap under the white cotton 'Havelock' cover distinctive to the campaign, with the neck flap for protection from sunstroke. To the left a junior infantry officer is being greeted by his mother and sister.

The picture is important for the sense of the occasion which it conveys. While the uniforms are not correct in every detail, it is the case that one private did receive the Victoria Cross before arriving home. The disturbances in Bengal touched national pride. Massacres of Europeans, luridly reported at home, led to some savage reprisals. O'Neil's appeal to British patriotism is more subtle in its depiction of how the war affected the lives of ordinary people. He illustrates an overlooked aspect of a soldier's life, that of reunion with his family after long absence on dangerous duty.