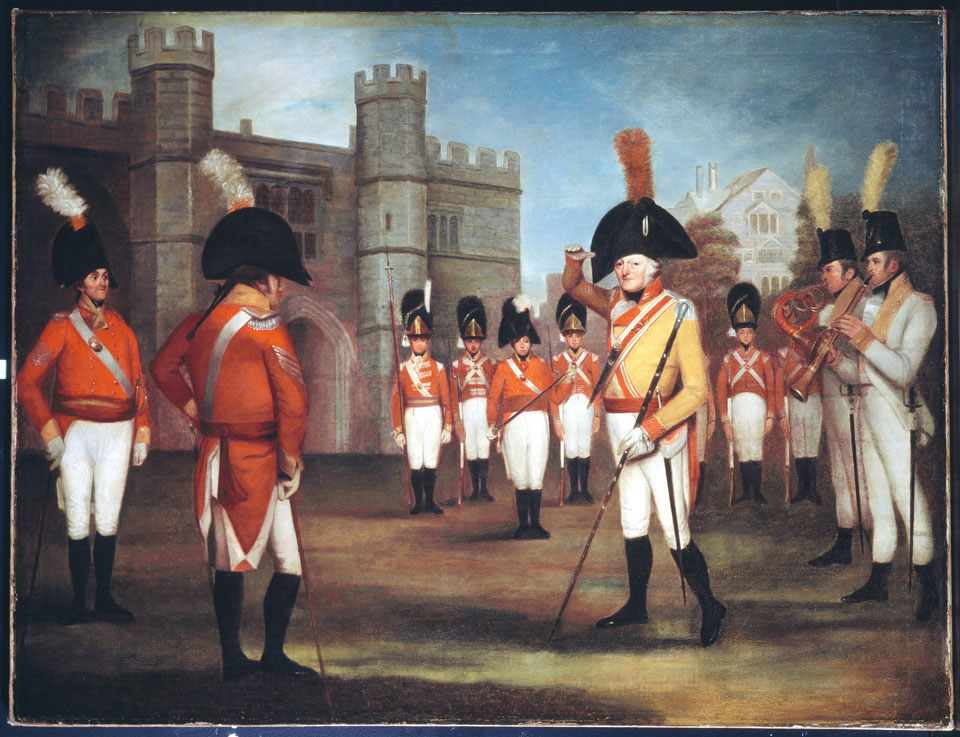 The Staffordshire Militia on parade at Windsor Castle, 1804 (c)

In 1797 the Staffordshire Militia was inspected by King George III. He was so impressed with the regiment's smart appearance that he ordered it to Windsor Castle to take up royal duties. It was stationed there again in 1799, 1800 and 1801, when it was disembodied. The King expressed great regret at its departure; however when hostilities with France were renewed in 1803, the regiment was reformed and ordered back to Windsor. It was welcomed by the King in person, who led it to the barracks. In 1805, George III granted the regiment the additional honour of 'The King's Own' in its title. As a royal regiment the facing colour of the uniform was then changed from yellow to royal blue.

The painting depicts the regiment parading just inside the Henry VIII Gateway of Windsor Castle and is an important record of the uniform of the time, of which there were few official records. Since the bandsmen wear the shako introduced in 1800, it can be dated to between about 1800 and 1805. The men are all quite individual, almost humorous characters, which suggests that these would have been recognisable portraits of real people. It is especially interesting to see that the two staff sergeants on the left are dressed almost exactly like officers. The drum major at centre right wears the reversed colouring characteristic of drummers' clothing; that is, his coatee is the yellow of the regimental facings while his plume and facings reflect the scarlet of infantry jackets. The two musicians are in bandsmen's uniform of white with yellow facings, while in the background are examples of grenadier and battalion company dress.

The regiment left Windsor in 1812, and was again stood down in 1814. It was re-embodied for a matter of some months in the following year, after Napoleon's escape from Elba.