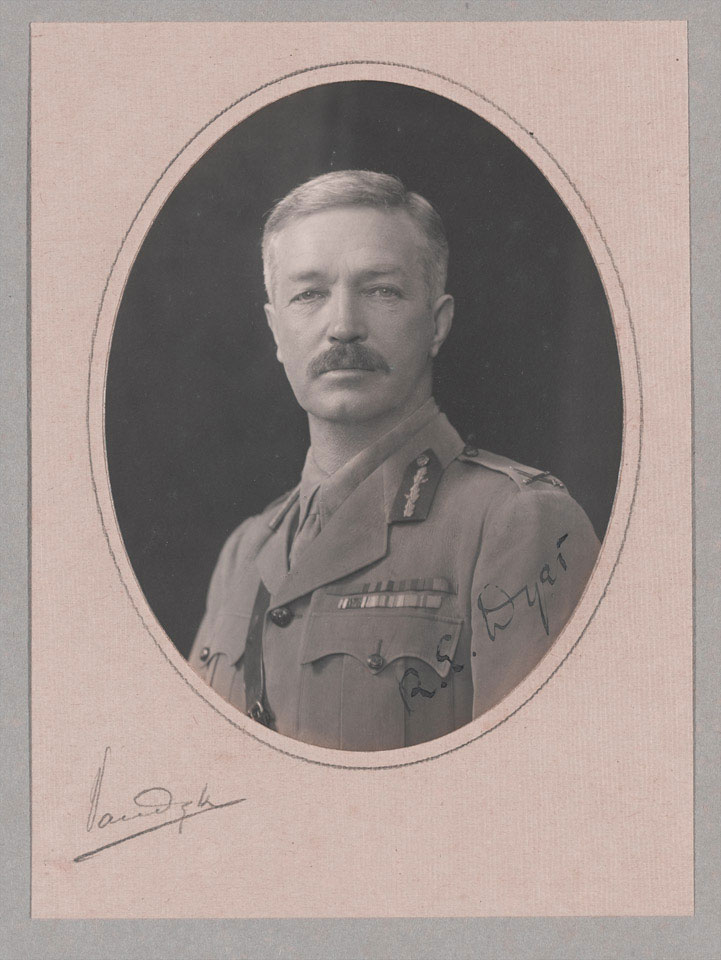 Dyer (1864-1927) was commissioned into the Queen's Royal Regiment (West Surrey) as a lieutenant before transferring to the Indian Army, initially joining the Bengal Staff Corps in 1887, but later transferring to the 29th Punjabis. He served with the latter in the Black Mountain Expedition (1888), the Relief of Chitral (1895) and the Mahsud blockade (1901-1902). In 1901 the then Captain Dyer was appointed a Deputy Assistant Adjutant General. He was then transferred to the 25th Punjabis. In August 1903 Dyer was promoted to major, and served in the Zakha Khel Expedition (1908). He commanded the 25th Punjabis in India and Hong Kong and was promoted to Lieutenant-Colonel in 1910.

During World War One (1914-1918), he commanded the Seistan Force which prevented enemy infiltration from Persia into Afghanistan. For these services Dyer was Mentioned in Despatches and made a Companion of the Bath (CB). He was promoted colonel in 1915 and made a temporary brigadier-general in 1916.

Dyer was infamous for commanding the soldiers that opened fire on thousands of unarmed protesters at Amritsar in the Punjab on 13 April 1919. The protesters, as well as people out enjoying a local festival, were gathered at Jallianwala Bagh (garden) when they were fired upon without warning. Most of the people present did not know that Martial Law had been declared. The official report stated that 379 people were killed and 1200 wounded, but the true figure was much higher.

Several weeks later, during the 3rd Afghan War (1919), Dyer commanded the brigade sent from Peshawar to relieve the besieged garrison at Thal Fort in the Kurram valley. Dyer was concerned that his relief force was too small and short of artillery. He loaded some of his trucks with logs to simulate guns; other vehicles dragged branches to raise the dust cloud of a much larger force. His ingenuity, determination and bravura help make sure the fort was relieved on on 2 June 1919, but did little to repair the damage done to his reputation at Amritsar.

The outrage at the massacre in India and Britain meant that Dyer was forced to retire on 17 July 1920. On his return to Britain, he was presented with £26,000 from a collection made on his behalf by the conservative newspaper the 'Morning Post' who named him 'the Saviour of the Punjab' and 'The Man Who Saved India'. The reality was different, the massacre Dyer had led was a watershed in the history of British India and helped pave the way for the growth of Gandhi's independence movement.