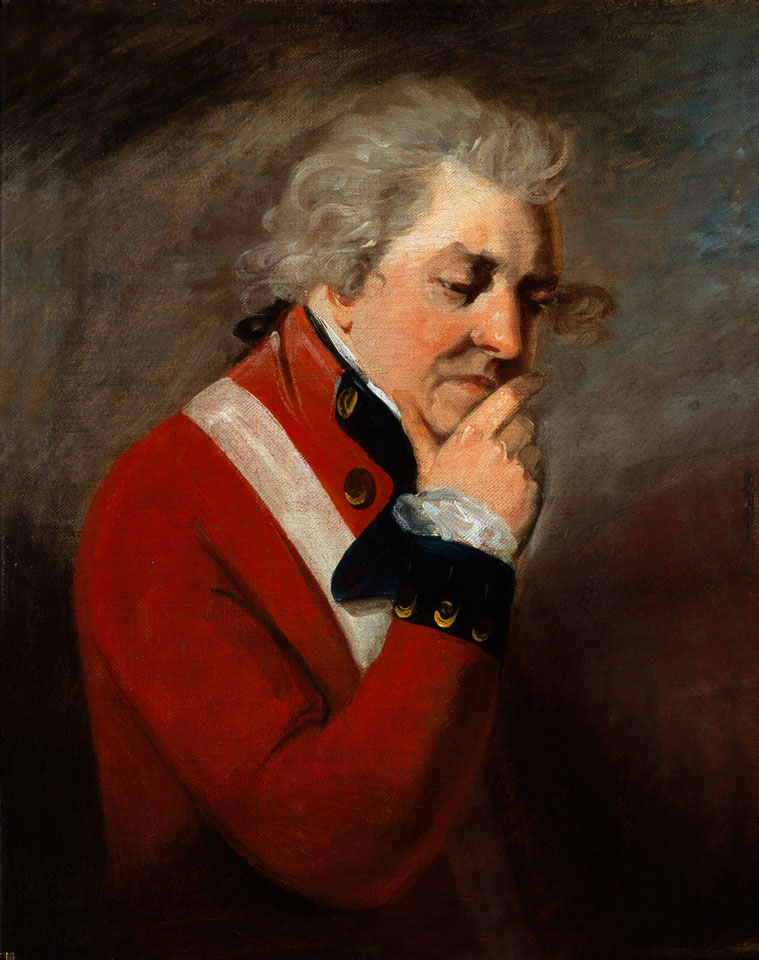 Lieutenant-General John Burgoyne (1722-1792), a study for a detail of 'The Funeral of General Simon Fraser, who was shot after the action at Saratoga, October 7, 1777'

'Gentleman Johnny' Burgoyne began his military career as a cornet in the 13th Light Dragoons in 1740. However his elopement with the Earl of Derby's daughter in 1743 cut short his career for a while. Reconciled with his father-in-law, he obtained a captaincy in the 11th Dragoons, later joining the Coldstream Guards. In 1759 Burgoyne raised a regiment of light cavalry in emulation of Cossacks and Prussian hussars, the 16th Regiment of (Light) Dragoons. Popular and clubbable, Burgoyne was not hindered as a leader of fashionable London society by becoming Governor of Fort William, Scotland in 1769.

Early in the American War of Independence (1775-1783), Major-General Burgoyne went to America, where he witnessed the ineffective British victory at Bunker's Hill. He returned to England, disgusted by the lack of any firm initiative. Almost immediately he was sent to Canada as second-in-command, where he proposed a new campaign, to move south on New England and cut it off from the central and southern colonies, joining up with other columns moving north. In the event, he took the field with only about half the strength he wanted. Although at first it forced the American General Schuyler back, Burgoyne's inadequate army was not reinforced and soon overreached itself. It was beaten at various engagements, eventually being repulsed by a large American Army at Bemis Heights on 7 October 1777. Brigadier-General Simon Fraser was mortally wounded in the action. As this portrait for Fraser's funeral painting suggests, Burgoyne was greatly affected by his death.