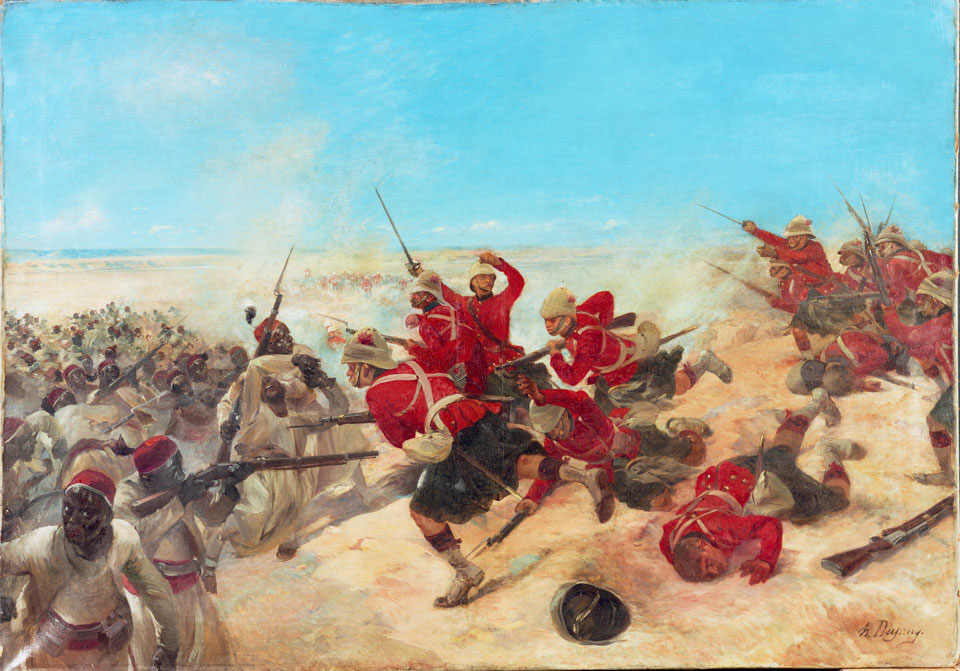 The Black Watch at the Battle of Tel-el-Kebir, 1882

Tel-el-Kebir lies at a strategic point on the railway between Ismailia and Cairo. On 13 September 1882 it was the scene of the final, decisive action of the Egyptian War, fought between the British (then joint rulers of Egypt, with France) and Arabi Pasha, an Egyptian Army officer and leader of the revolt against foreign rule.

Lieutenant-General Sir Garnet Wolseley (1833-1913), commanded the Expeditionary Force which was outnumbered two to one. However, in a bold operation, he led a long night march to make a surprise dawn attack upon the heavily-fortified Egyptian position at Tel-el-Kebir.

The painting depicts the moment at first light when the Highland Brigade, having advanced within 150 yards of the Egyptian trenches and fixing bayonets as they went, stormed the enemy at bayonet-point. A complete rout of the Egyptians took place in a very short time, opening the way for the entry into Cairo, where Arabi surrendered on 14 September.

This is one of a series of paintings commissioned by Charles Letts and Co, London, from this French artist to illustrate William Maxwell's book, 'British Battles', published in 1902.