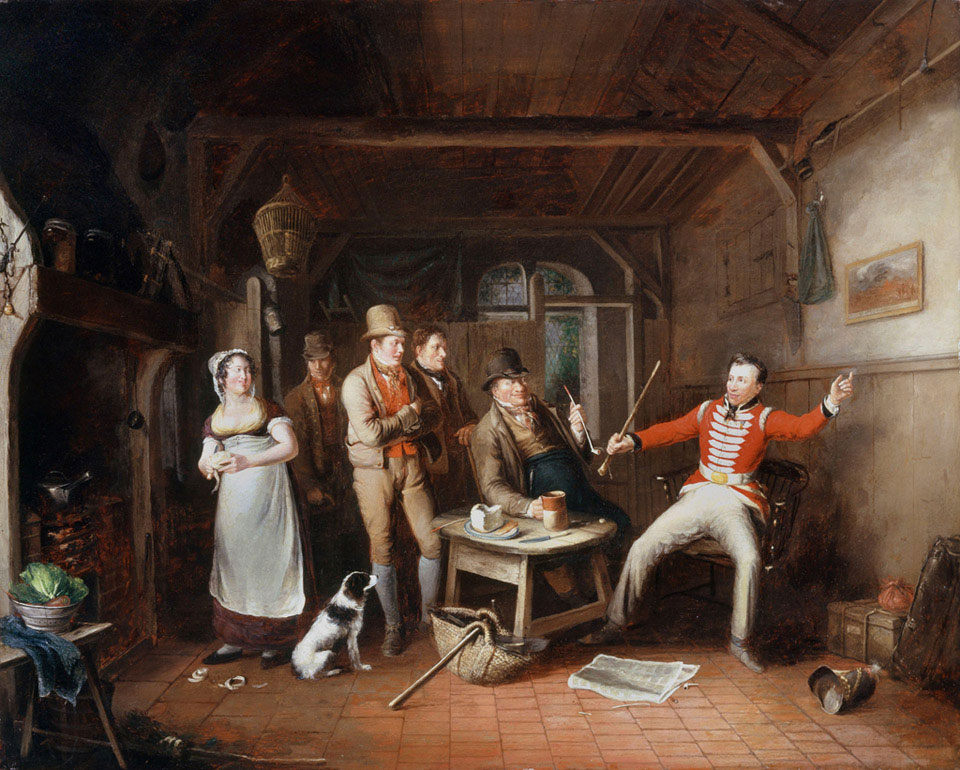 A soldier relating his exploits in a tavern, 1821

In a tavern interior, a soldier holds forth to an audience of four fellow customers and a bar-maid. The subject of his tale, which he imparts to an apparently sceptical audience, is indicated by clues in the painting. Since he points with his left hand to the print of the Battle of Waterloo on the wall, and wears a Waterloo medal on his breast, the spectator is meant to understand that he is recounting his own experiences of the battle.

The Battle of Waterloo (18 June 1815) proved to be the final defeat of Napoleon Bonaparte. Wellington's 'battle of giants' was therefore decisive in determining the subsequent history of Europe. In recognition of its importance, service at Waterloo carried a special status in the Army and every man who fought in the campaign received a silver medal, impressed with his name. As a unique concession, 'Waterloo men' received an additional two years' service towards their pension entitlement.

The overthrown French Emperor lived out his days in exile on the British-held territory, on the island of St Helena in the southern Atlantic Ocean. He died there on 5 May 1821. Painted in the same month, this picture alludes to news of the Emperor's death in the discarded newspaper seen on the floor in the foreground. With this news, the threat posed to Britain and Europe by one of the world's greatest generals was finally brought to a close.

Donated by Sir Alec and Lady Martin through the Art Fund.