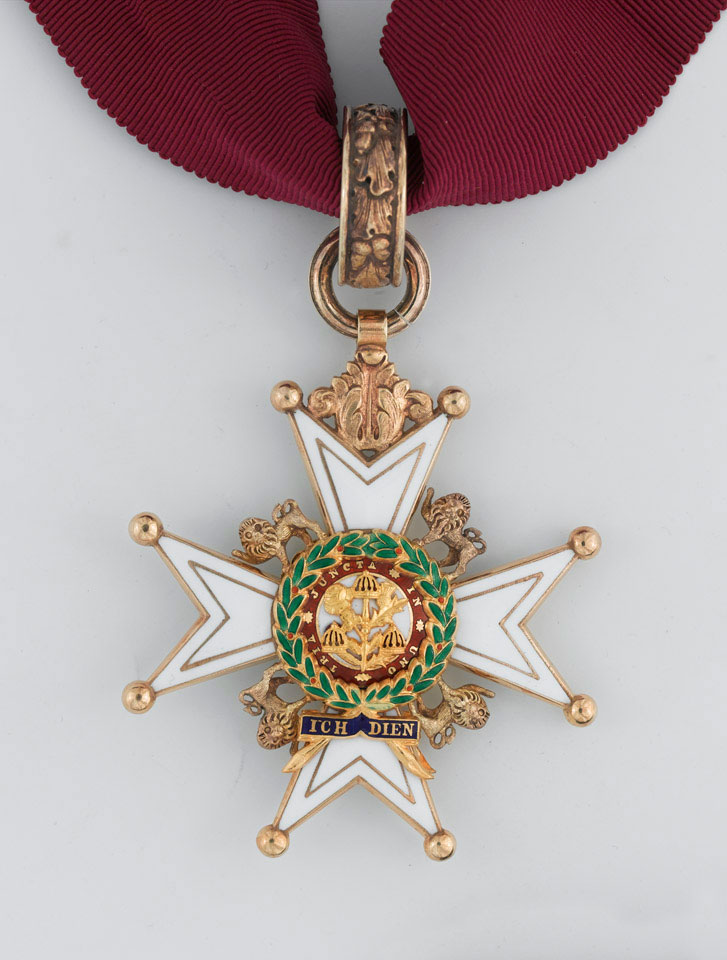 Military badge of the Order of the Bath in the form of an enamelled eight-pointed white Maltese Cross, with gold lions between the arms; in the centre, are three crowns, and a thistle, rose and shamrock within a red circlet bearing the motto of the Order, 'Tria Juncta In Uno' (Three Joined in One)', within a green laurel wreath; with the Order's Military Division motto, 'Ich Dien' (I Serve), in gold letters on a blue scroll below.

General Sir Cecil Frederick Nevill 'Make-Ready' Macready was born on 7 May 1862. The son of an actor, he was commissioned into the Gordon Highlanders in 1881. He served in the Egyptian War of 1882, staying on with the military police in Alexandria until 1889. Macready was promoted to major in 1899 and served with the 2nd Battalion, Gordon Highlanders in South Africa during the Boer War (1899-1902). A series of staff posts followed and Macready was involved in the formation of the Territorial Force and military aid to the civil power operations including the employment of soldiers during labour disputes and the deployment of troops to Ireland during World War One (194-1918). From 1920, through the closing stages of the Irish War of Independence and the subsequent Irish Civil War, Macready held the post of General Officer Commanding-in-Chief in Ireland.

The Order of the Bath was an order of chivalry created in 1725 by King George I. The name of the order derives from the ritual of medieval knighthood which could include purification by bathing prior to standing overnight vigil in a chapel or church. The Order's motto, 'Three Joined in One', can refer either the Union of England, Scotland and Ireland, reinforced by the use of the three crowns and the national symbols used on this insignia,or the Christian religious concept of the Trinity. The Order has three classes: Knight Grand Cross or Dame Grand Cross (GCB); Knight Commander (KCB) or Dame Commander (DCB); Companion (CB). The badge of the Order of the Bath is worn by all members. GCBs wear the badge on a ribbon or sash or, on certain formal occasions, suspended from a gold collar. The collar is returned to the Central Chancery of the Orders of Knighthood when the holder dies.