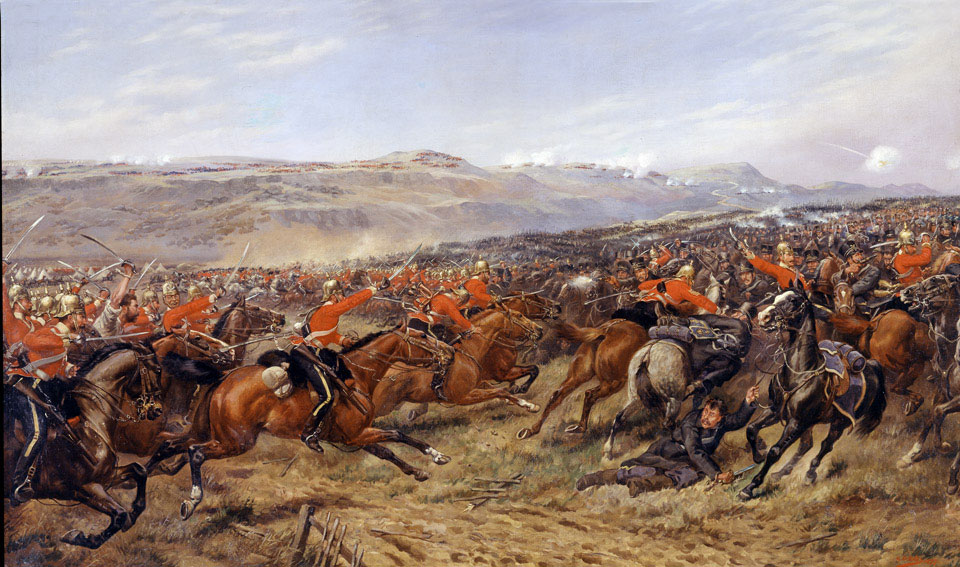 The Charge of the Heavy Brigade at the Battle of Balaclava, 25 October 1854

During the Crimean War (1854-1856) Russian forces mounted an attack on the British position at Balaklava. A large body of some 3,000 Russian cavalry threatened the road to the harbour of Balaklava itself.

The British Heavy Brigade, about 800 strong, consisted of ten squadrons of heavy cavalry, commanded by Major-General (later General) The Honourable (later Sir) James Yorke Scarlett. Seeing the Russian horsemen halted, and thus vulnerable to attack, Scarlett immediately charged uphill with three of his squadrons, being successively reinforced by the remaining seven squadrons of his brigade. Reeling from this series of attacks, the Russian cavalry retired in disorder a few minutes later.

The painting depicts the action as the first line of the Heavy Brigade crashes into the Russian cavalry. In the foreground is the 2nd squadron of the 6th (Inniskilling) Dragoons, while in the background are two squadrons of the 2nd (Royal North British) Dragoons (later Royal Scots Greys). In reality, because of the difficult ground it had to cover, the pace of the Heavy Brigade's attack was far gentler than the painting suggests.