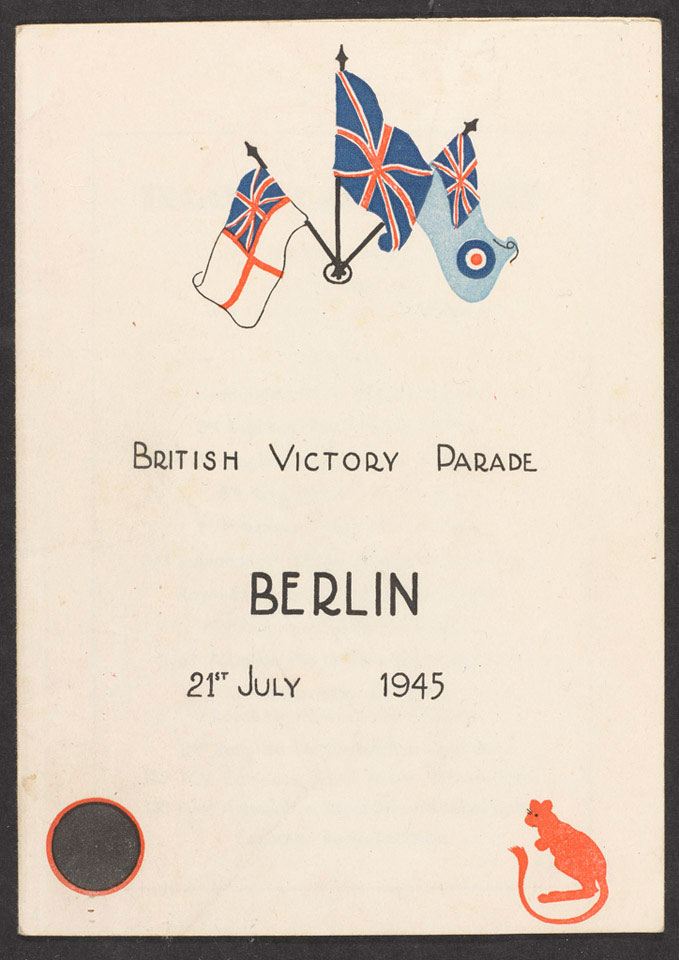 The programme cover features three flags representing the British Army, Royal Navy and the Royal Air Force, as well as the insignia of the 7th Armoured Division, a red jerboa, and the new Berlin garrison, a black circle surrounded by a red ring. The programme lists event times and participating units.

After the conclusion of the Second World War, the victorious Allies set about occupying a defeated Germany. On 21 July 1945, the British held a victory parade through the ruins of Berlin to commemorate and celebrate the end of the War. Around 10,000 troops of the British 7th Armoured Division, the famous 'Desert Rats', who had fought from the North African desert to Germany, paraded under review by British Prime Minister Winston Churchill and Field Marshal Bernard Montgomery. Many other victory parades elsewhere in the British Zone were held by units in their own small patches of occupied territory.

On 7 September 1945, there was another parade through Berlin, this time featuring all of the victorious Allies. However, neither Montgomery nor the US General Dwight D Eisenhower, the Supreme Allied Commander, attended. They were represented instead by their deputies. While seemingly insignificant, this gesture signified a deterioration in the relationship between the Allies. The differences in ideology between the West and the Soviet Union were becoming harder to ignore, and the partnership was growing more fractious. The increasing frostiness was unmissable and the slide towards a Cold War had begun.

From a collection of papers relating to the service of Junior Commander Margot Marshall, Auxiliary Territorial Service, 1941-1945.