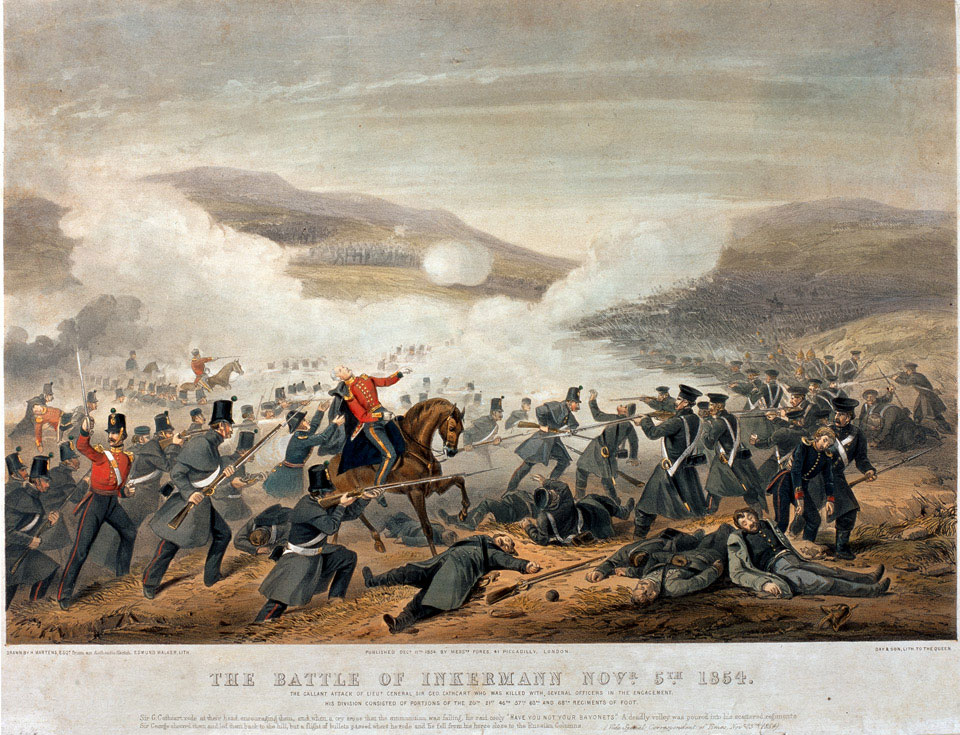 'The Battle of Inkermann Novr. 5th. 1854. The Gallant attack of Lieut.[sic] General Sir Geo. Cathcart who was killed with several officers in the engagement'

The print reproduces an extract from 'The Times', 23 November 1854 describing the Battle of Inkerman:

'Sir G. Cathcart at their head encouraging them, and when a cry arose that the ammunition was failing, he said coolly "Have you not your bayonets." A deadly volley was poured into his scattered regiments. Sir George cheered them and led them back to the hill, but a flight of bullets passed where he rode and he fell from his horse close to the Russian Columns.'

In reality, Cathcart had thrown his life away. Still indignant at the way his advice was disregarded while he had been in possession of his dormant commission to succeed Lord Raglan, he ignored an order to move the 400 men under his immediate command to fill a gap in the British line, launching them instead in a foolish attack which the historian Kinglake dubbed 'the false victory'. Brigadier-General Richard Airey, who had conveyed Raglan's order to Cathcart, found it hard to muster much sympathy: 'Poor Cathcart - so wild and inconsiderate, was always for performing some action without reflection or knowledge. What he attempted quite wrong and against the orders I had positively given him 5 minutes before - so sad!!'